3Di somehow missed this story when it was first published back in November. 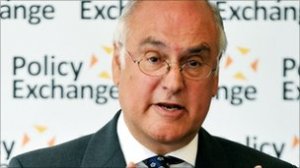 [Note the photo on the BBC’s story features the Chief Inspector standing in front of a ‘Policy Exchange’ backdrop – presumably taken on the premises of the well-known right-wing think tank.]

The incoming head of Ofsted has told MPs his “tough guy” image will not be a barrier to success in heading England’s schools inspection system.

He told the Commons education committee he had been known to be a bit like Clint Eastwood character “Dirty Harry”.

This image could be useful in raising school standards, he suggested.

Various people interviewed on the news programmes today spoke about Ofsted bullying and about intimidatory language.

“This is not about getting rid of headteachers,” said Sir Michael on Channel 4 News this evening. Really?

The interviewer also raised the spectre of Chris Woodhead.

It’s been a significant week for the Chief Inspector.

Gary Foskett and Clare Blackhall are educationalists, writers and consultants. We work with schools and other organisations who share our vision of how schools, businesses, etc should work in the 21st Century. We also run courses and contribute to conferences - speaking about our three dimensional model of intelligences and how schools, colleges and universities can develop the full potential of all their staff and students. We also offer consultancy for businesses and public sector organisations to support staff training and organisational change and development. For more detailed information read our blog at https://3diassociates.wordpress.com/ or see our website at www.3diassociates.com.
View all posts by 3D Eye →
This entry was posted in Uncategorized and tagged bullying, challenge, Chief Inspector, Dirty Harry, education, headteachers, inspections, Ofsted, politics, quality teaching and learning, schools, Sir Michael Wilshaw, standards, support. Bookmark the permalink.