Our Minds, Our Instincts, Our Reactions

In our two previous blog posts we’ve written about two types of people who might be considered polar opposites. The fictional character Derek has a tremendous capacity for empathy, care and compassion – qualities which are totally lacking in the mass murderer Anders Breivik. Derek has very limited intellectual capabilities whereas Breivik – in common with psychopaths generally – is self-taught and an extremely cunning individual, full of guile, who very likely has an extremely retentive memory.

On our 3Di model of human intelligences these different types of intelligence as represented by Derek and Breivik are not so much polar opposites as on completely different continuums – complementary to and at right angles to one another.

Derek is without doubt an appealing and sympathetic character, in spite of being physically unattractive and in spite of his limited intellect. As for Breivik, it must be obvious that anyone who finds him in any way appealing or attractive must be either unaware of him being an extreme racist, neo-fascist and mass murderer, or perhaps drawn to him as a fellow psychopath. As it happens Breivik is a loner and a loser, and it seems highly probable that that even his own mother was pleased that he stayed out of her way and spent the majority of his time in his own room.

In today’s blog, by way of contrast, we’re focusing on individuals who possess high degrees of all six human intelligences. We’re also putting a spotlight on the most misunderstood and unregarded of our intelligences, which is instinctual intelligence.

Watching the Shanghai Grand Prix from the comfort and quiet of an armchair early on Sunday morning it was possible to slip into a contemplative and meditative state of mind. For example, I found myself thinking about the instinctual intelligence (as well as the overall character) of the drivers of those state-of-the-art Formula 1 cars hurtling around a track at frankly insane speeds.

It’s not just a question of driving a car along a straight at 200 mph – it’s also about cornering at speeds well above 100 mph, or even at 40 mph around a hairpin bend. Let alone doing all that with other cars all around you, sometimes millimetres away from crashing into you, sometimes actually crashing into you. What does it take? And how do you learn how to do that stuff? Why would you want to do it anyway?

What kinds of people do these things for a living? Introverts? Extroverts? Thrill seekers? Crazy petrol heads? The top three drivers sat calmly in the interview room afterwards and spoke thoughtfully and insightfully about the race. All three of them are clearly of exceptional character and ability – doing a job they appear to love and which gives them opportunities for self-actualisation and self-expression.

For Nico Rosberg it was his first Grand Prix victory – after more than 100 races. Jensen Button and Lewis Hamilton have already won Formula 1 championships. Apart from having incredible cars to drive, how do they do it?

Having very high degrees of instinctual intelligence is part of the answer. We can all become proficient at driving a car without thinking very much about what we’re doing, but when the unexpected happens we’re liable to panic and do the wrong thing when there’s no time to think, and when reaction is all. These guys not only have to do the right thing when a car skids or locks its brakes, or when someone cuts in front of them – they also have to do it precisely, decisively, safely and instantly.

We need to understand that in certain situations THOUGHT does not come into decision-making, and instinctual intelligence takes over. We can train ourselves to perform certain actions in certain situations without thinking very much about them, but we’re often caught out by the unexpected and the unpredicted, and in those cases instinctual intelligence takes over – sometimes to good effect, and sometimes not.

There are times in life, in other words, when stopping to think is precisely the wrong thing to do, or is not even an option. In those situations you need to be fully focused in the NOW, in what sports people call the ZONE, and in what can also be called the experience of FLOW. It’s a state of relaxed concentration which is conducive to instinctual intelligence. Sports men and women are very familiar with the need for full attention and full focus in order to do the right thing and become successful, but we can all live better lives if we live ‘in the zone’ and experience ‘flow’. Zen philosophy advocates precisely this.

The 3Di model of human intelligences sees the first axis of intelligence as a continuum extending from ‘all instinct/no thought’ to ‘all thought/no instinct’. In other words, from pure instinct to pure intellect. To be truly effective and to live life to the full we need to be constantly ‘in the moment’ – alert and ready to employ both pure instinct and pure intellect, according to the situation, and of course combinations of the two intelligences according to the demands of the situations we find ourselves in.

It’s important to understand that Formula 1 drivers need high levels of both of these intelligences. The cars they drive are incredibly complex machines, and the drivers need to constantly monitor and analyse the performance of the car, figure out which adjustments need to be made to the many controls and switches on their steering wheel/dashboards, and do all that thinking and decision-making whilst their instinctual intelligence continues to operate and react to what’s happening around them on the track. They also do it whilst listening on their earphones to advice and instructions from their team.

It’s an interesting analogy for how we generally live in the world. It’s no wonder sports people, especially those who are the most ‘competitive’, feel ‘fully alive’ when they’re doing the work they enjoy. You might at this point recall what was said in our blog of 27th February, on the subject of how to be “happier”:

“”What will make me happier?” It’s about finding the overlap between the three questions, “What gives me meaning?” “What gives me pleasure?” “What are my strengths?” It’s about asking, “What is my calling?” and identifying the things you really want to do at school, at work, and with your life as a whole.”

The thing is, we all have the capacity to be ‘happier’. We just have to understand it, and live accordingly. The best schools enable children and young people to actually discover their strengths, their calling, the things that give them pleasure and meaning. All of which is a far cry from just doing well in timed tests and examinations.

On television recently there have been other programmes – outstandingly intelligent documentaries – about outstandingly intelligent and gifted people. David Hockney was interviewed about his life and his work, in the context of his recent exhibition at the Royal Academy which filled the entire exhibition space at the RA. Most of the exhibits were relatively recent work – images of the landscape in East Yorkshire. Hockney uses an amazing range of media, from water colours to oils to photographic collages to video to prints from his iPad. He thinks a great deal about what he does, and he’s intellectually aware of what he does and how he does it, but of course at the time when he’s actually working then he’s in the flow – in the required state of relaxed concentration in which his instincts can take over and his feeling for what he’s doing and his pursuit of self-expression (personal intelligence) causes him to make certain marks, use certain colours, see things from certain perspectives – without any ‘thinking’. He’s an innovator in a very traditional form of art – depicting the landscape.

At this point it’s worth mentioning the other intelligences Hockney clearly uses. His ‘personal’ intelligence moves him to develop his artistic ‘voice’ and to express his feelings about life and the world around us. His ‘spiritual’ intelligence is responsible for the awe and wonder he feels in a forest or looking out from a hilltop or from the rim of the Grand Canyon. His physical intelligence comes into play through his vision and close scrutiny of what he sees, and how he sees it. Add to that his concern for the perception of others and his desire to enable all of us to see things better and more clearly, and become better human beings, and you then have the full set – all six intelligences – instinctual, intellectual, personal, social, physical and spiritual. David Hockney is an exceptionally three-dimensional human being.

Another recent TV programme featured palaeontologist Jenny Clack – another exceptional human being – in the BBC4 series called ‘Beautiful Minds’. Watch it on catch-up TV if you can, or watch out for further repeats.

And to think I was intending to write today about music and intelligence and creativity. Manana, maybe. 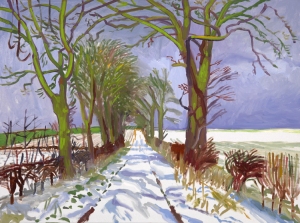 Gary Foskett and Clare Blackhall are educationalists, writers and consultants. We work with schools and other organisations who share our vision of how schools, businesses, etc should work in the 21st Century. We also run courses and contribute to conferences - speaking about our three dimensional model of intelligences and how schools, colleges and universities can develop the full potential of all their staff and students. We also offer consultancy for businesses and public sector organisations to support staff training and organisational change and development. For more detailed information read our blog at https://3diassociates.wordpress.com/ or see our website at www.3diassociates.com.
View all posts by 3D Eye →
Gallery | This entry was posted in Uncategorized and tagged 3Di Associates, Anders Breivik, David Hockney, Derek, education, empathy, Formula 1, Grand Prix, happiness, human values, instinctual intelligence, intellect, multiple intelligences, Norway, personal intelligence, psychopaths, Ricky Gervais, Royal Academy, Social Intelligence, spiritual intelligence, values and virtues, wellbeing, Yorkshire. Bookmark the permalink.