Finding Your Passion Changes Everything

Two months ago we wrote about Sir Ken Robinson’s latest book – The Element – How Finding Your Passion Changes Everything.

Today we’re returning to this book, starting with a passage from page 76 that connects with our recent blogs about the need to transform the way that music is taught and learned, and also with the concept of multiple intelligences.

To develop our creative abilities we also need to develop our practical skills . . . It’s important that we develop these skills in the right way.

I know many people who spent endless hours as children practicing scales on the piano or guitar and never want to see an instrument again because the whole process was so dull and repetitive. Many people have decided that they were simply no good at music when it’s possible that their teachers taught them the wrong way or at the wrong time. Maybe they should look again.

Mick Fleetwood is one of the most accomplished rock drummers in the world. His band, Fleetwood Mac, has sold tens of millions of copies of their recordings . . .

“I was a total void in academic work, and no one knew why,” he told me. “I had a learning disability in school, and still do.”

“I was suffering. I had no sense of what I was supposed to be because everything academic was a total failure, and I had no other reference points.”

Fortunately for Mick (and for anyone who later bought his albums or attended his concerts) he came from a home where his family saw beyond the limits of what they taught and tested in schools . . . In the Fleetwood household everyone understood that brilliance came in many forms and that being poor at maths . . . hardly doomed one to an inconsequential life.

Mick’s school performance confounded his teachers. They knew he was bright, but his scores suggested otherwise. And if the scores said otherwise, there was little they could do. The experience proved frustrating for the boy who dreamed of being a drummer. Finally, in his teens, he’d had enough.

“One day I walked out of school and I sat under a large tree in the grounds. I’m not religious, but with tears pouring down my face I prayed to God that I wouldn’t be in this place any more. I wanted to be in London and play in a jazz club . . . I made a firm commitment to myself that I was going to be a drummer.”

Mick’s parents understood that school was not a place for someone with Mick’s kind of intelligence . . . They put him on a train to London with a drum kit and allowed him to pursue his inspiration.

For Mick Fleetwood getting away from school and the tests that judged only a narrow range of intelligence was the path to a hugely successful career. “My parents saw that the light in this funny little creature certainly wasn’t academics.” It happened because he understood innately that he had a great aptitude for something that a score on a test could never indicate. It happened because he chose not to accept that he was “useless according to the status quo”.

This is such a brilliant book, and at £9.99 (or less) for the Penguin paperback you can’t afford to NOT buy it and read it. In fact, if any of our current blog followers has a temporary cash flow problem and can’t raise the price of the book then let us know and we’ll happily send you a loan copy. It’s that good, and that important.

“A book that lightens and lifts the minds and hearts of all who read it.”

“A great and inspiring book. After the first page, you have to abandon your ego and look for your own gifts and graces.”

“The Element” is a passionate and persuasive appeal to think differently about ourselves and a guide to facing the future.”

“It is time to educate our educators. In Sir Ken Robinson’s rich, deeply entertaining and inspiring new book he shows us in the most intriguing way and with humour and humility how we  can look again at how we learn and how we teach.”

Ken Robinson’s TED lecture on creativity and education has been downloaded over 3 million times in 200 different countries. See: 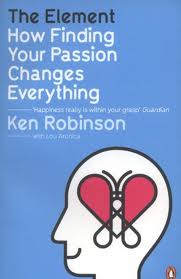 Gary Foskett and Clare Blackhall are educationalists, writers and consultants. We work with schools and other organisations who share our vision of how schools, businesses, etc should work in the 21st Century. We also run courses and contribute to conferences - speaking about our three dimensional model of intelligences and how schools, colleges and universities can develop the full potential of all their staff and students. We also offer consultancy for businesses and public sector organisations to support staff training and organisational change and development. For more detailed information read our blog at https://3diassociates.wordpress.com/ or see our website at www.3diassociates.com.
View all posts by 3D Eye →
Gallery | This entry was posted in Uncategorized and tagged 3Di Associates, academic, creativity, drumming, education, enjoyment, imagination, Ken Robinson, learning, Mick Fleetwood, motivation, multiple intelligences, music, pedagogy, personal intelligence, philosophy, quality teaching and learning, schools, The Element, wellbeing. Bookmark the permalink.