Regardless of the work we do, or the profession we belong to, or the status we have in life, we can all aspire to spiritual intelligence, to ethical behaviour, to clear and positive values, and to virtuous living.

This is a passage from a well-known, best-selling novel:

“I’m proud that my name is a byword for a man who keeps his word and remembers his promises. I’ve never played political games. I’ve never had problems negotiating with trade unions. I was responsible for the livelihoods of thousands of people, and I cared about my employees. There are many reasons why the (X) Corporation is on the ropes today, but one of the key ones is the short-termism and greed [of the current shareholders].”

Will Hutton and other analysts have been saying for some time that the short-termism and greed of our bonus-chasing and targets-chasing managers and directors is another key factor in the failure of many businesses and other organisations to grow sustainably and to prosper as they could and should:

http://www.guardian.co.uk/commentisfree/2012/sep/30/will-hutton-new-model-capitalism A call for “a culture dedicated to long-term, ethical goals”.

http://www.guardian.co.uk/commentisfree/2012/jun/30/will-hutton-barclays-banking-reform A call for “a remoralisation of our economy and a new industrial revolution”.

http://www.guardian.co.uk/commentisfree/2012/mar/17/britain-models-capitalism A call to “embrace new models of capitalism”.

These are some of the issues touched on yesterday in Ed Miliband’s speech to the Labour party conference, in which he referred many times to the need for a “One Nation” mindset and for all members of society to contribute to the national wellbeing. His speech seems to have made a good impression amongst commentators and voters right across the political spectrum – as well it might, given that it was a Tory, Disraeli, who coined the phrase “One Nation Conservatism”, way back in the 19th Century.

To have spiritual and social intelligence is to care about the less well-off and the less fortunate. It’s to care for the ill, the dispossessed and the disabled. This has been the central message of every major world religion from Buddhism to Islam and Christianity. It’s also a guiding principle of all humanists. We need to consider the teachings of the Buddha, Jesus, Mohammed, and all the other prophets, as well as the views of all the secular philosophers going back through history, and we need to consider how children and young people develop spiritual and social intelligence through values education within schools and families. A society whose members don’t really care for one another is a sick society. How do so many people become extreme egotists full of selfishness and greed? And what can teachers and parents do to ensure that multiple intelligences and positive attitudes are given a proper chance to develop, as they surely ought, in every individual?

Obviously, as far as 3Di is concerned, the key part of Mr Miliband’s speech was the section on education. This is the essence of what he said:

I remember at Haverstock school, my comprehensive, the kids who were good at passing exams, who were academic, they could go to university and the world would just open up for them like it did for me. But think about all those kids who had talent and ability, great talent and ability. School just didn’t offer them enough. It was true twenty five years ago, and it is even more true today. 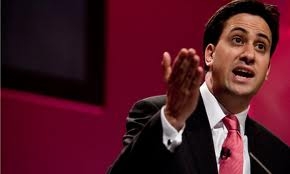 Just think in your mind’s eye about the 14 year old today. Today is a school day. Think about that 14 year old, not academic, already bored at school, maybe already starting that process of truanting, of not going to school. Now of course they need to get back to school and their parents need to get them back to school. They can’t afford to drift through life with no qualifications and Britain can’t afford for them to do it either. But we can’t just say to that 14 year old just put in the work, because we have been failing them too. You see for a long time our party has been focused on getting 50% of young people into university. I believe that was right. But now it’s time to put our focus on the forgotten 50% who do not go to university.

Here’s the choice that I want to offer to that 14 year old who is not academic. English and maths to 18 because rigour in the curriculum matters. But courses that engage them and are relevant to them. Work experience with employers. And then culminating at the age of 18 with a new gold standard qualification so they know when they are taking that exam they have a gold standard vocational qualification, a new Technical Baccalaureate. A qualification to be proud of. You know, we’ve got to change the culture of this country friends. We can’t be a country where vocational qualifications are seen as second class.

They are a real route to apprenticeships and jobs. They can be as valuable to our young people as a university degree. We need to make it so.

So we’ve got to change the culture in this country and there needs to be that real route to apprenticeships but let me tell you though, there is another problem. Only one in three large employers in Britain actually offers apprenticeships. And if anything, in the public sector the situation is far far worse. That is about a culture of a country. That’s about a culture of a country which hasn’t been dealt with for decades.

In education there really is a choice of two futures. Education for a narrower and narrower elite, with the Conservatives. Or a One Nation skills system as part of a One Nation economy with the next Labour government.

If we unpick some of this we find ourselves faced with the following issues:

What can we say? This isn’t exactly rocket science, and there’s nothing here we’d disagree with. It’s tempting to say this is all common sense, but to give Mr Miliband his due, he’s the first politician in recent memory who’s come out and made these sorts of statements. We’ve been used to decades of politicians making platform speeches about our failing schools – but only in the sense that they’ve been failing to “drive up standards”, and not that they’ve been failing their pupils through failing to offer an appropriate and relevant education. For that, at least, Mr Miliband, we thank you.

On the debit side, we would make these observations:

Again, none of this is rocket science, and many schools have been developing better systems of ensuring pupil wellbeing, motivation and ‘ownership’ of their learning across all of the intelligences for some considerable time. The best schools and the best teachers already know how to do this, and find a way to do it.

As for how to bring about these changes in our system of education – are we suggesting that Mr Miliband and his colleagues prepare to drive through these changes when/if they form a government? No, we’re not. We’re tired of politicians thinking they know all the answers and using a big stick to enforce their wishes. It’s time for people like Ed Miliband to make the point that we need to re-professionalise teaching and to move towards the Finnish system whereby the profession itself continually reviews practice, policies and pedagogy. By all means let politicians tell us their views, but we don’t need any more arrogant posturing, power games and career-building initiatives that good teachers don’t themselves need or believe in.

When it comes to understanding the true needs of children and providing for them in classrooms throughout the country we need some acknowledgement from politicians that they respect the views of teachers who are already successful in what they do, and who are trying very very hard already to develop forms of education that are truly fit for purpose in the 21st Century.

Mr Miliband’s speech can be seen and heard in full on the BBC’s website:

Gary Foskett and Clare Blackhall are educationalists, writers and consultants. We work with schools and other organisations who share our vision of how schools, businesses, etc should work in the 21st Century. We also run courses and contribute to conferences - speaking about our three dimensional model of intelligences and how schools, colleges and universities can develop the full potential of all their staff and students. We also offer consultancy for businesses and public sector organisations to support staff training and organisational change and development. For more detailed information read our blog at https://3diassociates.wordpress.com/ or see our website at www.3diassociates.com.
View all posts by 3D Eye →
Gallery | This entry was posted in Uncategorized and tagged 3Di Associates, creativity, curriculum, Ed Miliband, education, Finland, human values, intelligences, Labour, Labour Conference, learning, Miliband, multiple intelligences, One Nation, politics, PSHE, schools, Social Intelligence, spiritual intelligence, technical baccalaureate, values and virtues, Vocational education, wellbeing, Will Hutton. Bookmark the permalink.