Lessons for Peace and Spiritual Intelligence.

Samurai culture appears to be much misunderstood. Many people find it hard to get beyond the images of flashing swords, exotic suits of armour and epic battles. 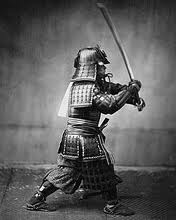 If we think about the martial arts, however, most of us understand that practitioners of the martial arts are forbidden to use their skills for selfish or aggressive purposes. Such fighting techniques are supposed to be for self-defence, or for the defence of others who are threatened or attacked.

From a spiritual intelligence point of view this is interesting. Jesus, of course, told his followers to forget about ‘an eye for an eye’ and instead to ‘turn the other cheek’ if someone struck them or tried to hurt them. Gandhi famously was a man of peace who refused to become involved in violent conduct of any sort, even though his declared intention was to rid India of British domination, imperialism and military occupation.

During the ‘Arab Spring’ last year thousands of demonstrators peacefully occupied Tahrir Square in Cairo to demonstrate against the Egyptian government and to show solidarity with one another. Their intention was to remain peaceful, but many of them fought back to defend themselves when they were attacked by thugs and by the police. Thankfully the Egyptian military refrained from attacking the demonstrators and from causing what would no doubt have been a bloodbath.

Those who have seen Kurosawa‘s classic film ‘Seven Samurai‘ (Shichinin no Samurai) will know that it’s an epic tale in which the Samurai act as defenders of a village that’s been threatened by bandits who are determined to rob it of its harvest. ‘The Magnificent Seven’ was the western-style remake of the Kurosawa film. 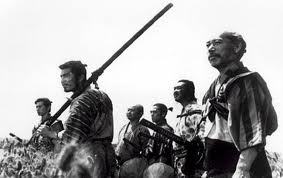 The above thoughts were triggered this weekend by reading an article in the Guardian about Neil Young‘s autobiography which he’s called ‘Waging Heavy Peace’. Young’s idea is that if we want peace in the world then ironically we have to fight for it. However, we don’t need to fight with weapons, since we have words and we have art and we have music. The war can be fought without violence, which was the philosophy espoused by Gandhi and all other pacifists. Striving for peace should therefore be a negotiation, and sometimes a battle of ideas and ideologies,

The really interesting philosophical question is whether those engaged in fighting ‘a just war’ are entitled to physically defend themselves. The United Nations Organisation disallows wars of aggression but permits countries to defend themselves with military action. Obviously the Bushido code of the Samurai required the ‘warrior class’ to sacrifice their own lives, if necessary, to protect the vulnerable and the weak from the aggression of criminals and outsiders. Another interesting question is whether the Samurai were entitled to take their own lives if they felt they had broken their code or brought shame upon themselves.

Neil Young is well known for writing a song called ‘Ohio‘, which was his response to hearing about the shooting of unarmed student protestors at Kent State University, and to seeing this photograph: 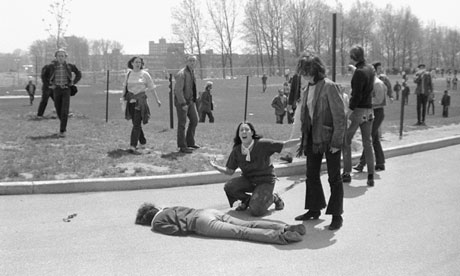 “The weight of that picture cut us to the quick. We had heard and seen the news on TV, but this picture was the first time we had to stop and reflect. It was different before the internet, before social networking, to say the least. So full of this feeling of disbelief and sadness. I picked up my guitar and started to play some chords and immediately wrote Ohio; four dead in Ohio. The next day, we went into the studio in LA and cut the song . . .

All the stations played Ohio. There was no censoring by programmers. Programming services were not even around; DJs played whatever they wanted on the FM stations. We were underground on FM. There was no push-back for criticising the government. This was America. Freedom of speech was taken very seriously in our era. We were speaking for our generation. We were speaking for ourselves. It rang true. The US government has still not apologised to the families of the fallen four of Ohio.” 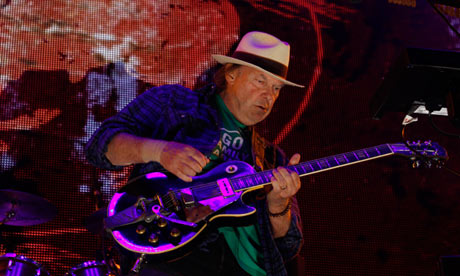 Gary Foskett and Clare Blackhall are educationalists, writers and consultants. We work with schools and other organisations who share our vision of how schools, businesses, etc should work in the 21st Century. We also run courses and contribute to conferences - speaking about our three dimensional model of intelligences and how schools, colleges and universities can develop the full potential of all their staff and students. We also offer consultancy for businesses and public sector organisations to support staff training and organisational change and development. For more detailed information read our blog at https://3diassociates.wordpress.com/ or see our website at www.3diassociates.com.
View all posts by 3D Eye →
Gallery | This entry was posted in Uncategorized and tagged 3Di Associates, Bushido, curriculum, education, emotional intelligence, empathy, human values, intelligences, Kent State University, learning, multiple intelligences, Neil Young, Ohio, pedagogy, philosophy, politics, schools, Seven Samurai, Social Intelligence, spiritual intelligence, teaching and learning, United Nations, values and virtues, Waging Heavy Peace, Young, Zen. Bookmark the permalink.