Multiple Intelligences and the Life of Pi

Soon to be on general release is the movie of the book ‘The Life of Pi‘, by Yann Martel. The brilliant Ang Lee directed the film. His previous films include the sublime “Crouching Tiger, Hidden Dragon”.

You can see a trailer for this new film here –

The Guardian’s review of the film –

Wikipedia has entries for both the book and the film –

In his author’s note, Yann Martel says this:

If we, citizens, do not support our artists, then we sacrifice our imagination on the altar of crude reality and we end up believing in nothing and having worthless dreams.

As far as ‘imagination’ is concerned, Albert Einstein once made the observation that imagination is more important than knowledge.

Whilst an artist apprehends life through a combination of direct observation, analysis, reflection, deduction, inference, intuition and empathy, it requires an effort of the imagination by writers and artists to translate and shape ideas into a form that gives them the power to communicate with others.

The Life of Pi is a book created by a true artist. It tackles many of the big issues facing us as humans, and contains many valuable insights into the human condition. It’s easy to see why Ang Lee wanted to make a film of this book. The only real concern that one might have with it is the claim that it’s a story which will make its readers believe in God. What it does in reality is to provide, within the context of a gripping narrative, some very interesting thoughts on nature, consciousness, and different kinds of intelligence.

Quotes from the book:

“Father was a natural. He made up for a lack of formal training [education] with an intuitive gift and a keen eye. He had a knack of looking at an animal and guessing what was on its mind.” 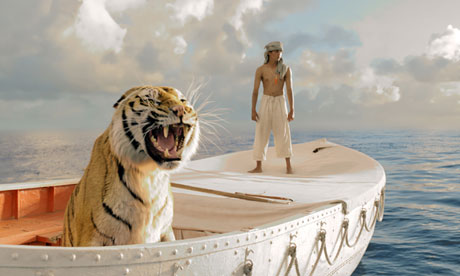 Leaving aside the fact that animals don’t have reflective minds, we can understand this refers to an ability to ‘guess’ the animal’s concerns and intentions. However, we might want to query the author’s use of the word ‘intuitive’, and we might choose to substitute ’empathetic’, which is a very different kind of intelligence. Even so, Pi’s father could also have had flashes of intuition.

“I have no conscious memory of my first go-around in a temple, but some smell of incense, some play of light and shadow, some flame, some burst of colour, something of the sultriness and mystery of the place must have stayed with me. A germ of religious exaltation, no bigger than a mustard seed, was sown in me and left to germinate. It has never stopped growing to this day.”

The rest of Martel’s description of the sights and sounds and smells of a temple is brilliant, and well worth reading, on page 47. However, we might need to query his use of the term ‘religious exaltation’. Why religious? Why not ‘spiritual’? After all, the temple could just as well have been Buddhist. Buddhism is a philosophy and not a religion. It has no use for a God, or gods. Its essence is spiritual intelligence, which is a quality we can all possess, to a greater or lesser extent. The highest form of spiritual intelligence is the ability to experience exaltation, awe and wonder. Buddhists, atheists, agnostics and humanists can all, through their spiritual intelligence, experience transcendental exaltation, awe and wonder.

On page 63 is a description of someone experiencing exaltation in a Christian context:

“I saw the Virgin Mary . . . When I say I saw her, I don’t quite mean it literally, though she did have body and colour. I felt I saw her, a vision beyond vision. I stopped and squinted. She looked beautiful and supremely regal. She was smiling at me with loving kindness . . . My heart beat with fear and joy.”

“Lovingkindness”, of course, is a key concept in Zen and Buddhism.

“Nature draws the grandest of pictures, and I felt the feelings of wonder and smallness that we all feel, and I got a clear sense of direction from the spectacle, most definitely, but I mean that in a spiritual sense, not in a geographic one.”

“With time and experience I became a better hunter. I grew bolder and more agile. I developed an instinct, a feel, for what to do.”

Don’t we all? Or maybe we’re born with a healthy measure of instinctual intelligence, and often lose it along the way; or it becomes deactivated through our upbringing and schooling.

“Look . . . a bolt of lightning!” I saw how he felt about it. He was flat on the floor . . . limbs splayed and visibly trembling. The effect on me was completely the opposite. It was something to pull me out of my limited mortal ways and thrust me into a state of exalted wonder.”

Many of us have times when we enjoy a transcendence of our ‘limited mortal ways’ and reach for more spiritual dimensions of consciousness – or states of ‘exalted wonder’.

“Stop your trembling! This is a miracle. This is . . . this is . . . ” I could not find what it was, this thing so vast and fantastic. I was breathless and wordless . . . But I was smiling . . . one of the few times during my ordeal when I felt genuine happiness.”

“At moments of wonder it is easy to avoid small thinking, to entertain thoughts that span the universe, that capture both thunder and tinkle, thick and thin, the near and the far.”

This raises questions about how often in our schools, colleges, universities and workplaces we transcend ‘small thinking’, and entertain thoughts that span the universe, both the near and the far, the interior and the exterior.

Do we not owe it to our young people, at least, to enable them in various ways, through various means, to recognise, understand and appreciate the spiritual and the transcendental? Why would we not want them to see the difference between the spiritual and the merely religious? Why would we want them to leave their spiritual intelligence completely unrecognised, untapped and undeveloped?

“So am I! I applied my reason at every moment. Reason is excellent for getting food, clothing and shelter. Reason is the very best tool kit. Nothing beats reason for keeping tigers away. But be excessively reasonable and you risk throwing out the universe with the bathwater.”

“He was such an evil man. Worse still, he met evil in me – selfishness, anger, ruthlessness. I must live with that.”

As to whether we value and support our artists – shouldn’t we be even more concerned about how we produce artists and creative people generally? Shouldn’t all of us have a right to an education that develops intelligent artistic perception, artistic expression and creative skills – in all of us and not just an elite of potential professional artists?

Gary Foskett and Clare Blackhall are educationalists, writers and consultants. We work with schools and other organisations who share our vision of how schools, businesses, etc should work in the 21st Century. We also run courses and contribute to conferences - speaking about our three dimensional model of intelligences and how schools, colleges and universities can develop the full potential of all their staff and students. We also offer consultancy for businesses and public sector organisations to support staff training and organisational change and development. For more detailed information read our blog at https://3diassociates.wordpress.com/ or see our website at www.3diassociates.com.
View all posts by 3D Eye →
This entry was posted in Uncategorized and tagged 3Di Associates, Albert Einstein, Ang Lee, Buddhism, creativity, curriculum, education, emotional intelligence, empathy, human values, intelligence, intelligences, learning, Life of Pi, multiple intelligences, personal intelligence, philosophy, Pi, schools, Social Intelligence, spiritual intelligence, teaching and learning, the human condition, tiger, values and virtues, wellbeing, Yann Martel. Bookmark the permalink.

1 Response to Multiple Intelligences and the Life of Pi