Tablets Needed in the Classroom

In our last post, we commented on the excellent article by Dr. Yong Zhao regarding his childhood instruction on how to handle water buffalo, and how it didn’t exactly prepare him for the world of work or indeed his future life.

Furthermore, he wasn’t very good at handling water buffalo, possibly because he didn’t enjoy it. He made the point that a prescribed curriculum is so often counter-productive, useless and the product of elitist prescription by arrogant policy makers.

How many children and young people are we somehow excluding or failing to turn into enthusiastic learners, we wonder?

There’s another issue here. We often hear that many of the jobs that our five year olds will do when they reach adulthood haven’t yet been invented. We don’t know what careers our children are going to take. So what should we be teaching our children if we don’t know what knowledge they will need?

Perhaps we ought to concentrate on what we do know they will need, irrespective of the jobs that they end up doing. They need to be numerate and literate. They need to have good communication skills. They need to be able to deal with the problems that life thrusts upon us like loss, separation, handling our emotions. They need to be creative, innovative, thoughtful in relationships and work. These are skills for living as well as skills for working.

As the Dalai Lama said in a message that went viral at the end of last year, “If every 8 year old in the world is taught meditation, we will eliminate violence from the world within one generation”. Perhaps we ought to consider this too.

One thing we can be fairly certain of is that whatever work our five year olds do later in life, it will probably involve working on or with a computer in some way, which is why it is so important to use IT now. Yet, we shouldn’t be complacent about this. We don’t want our children to be mere recipients of programs for computing technology. We want them to be innovators too. What are we doing in this country to support children to make programs as well as use them?

We’d like to draw your attention to two articles found on the internet this week through Twitter (an integral part of our lifelong learning now), with thanks to Daniel Edwards (@syded06) and Bob Harrison (@bobharrisonset) for bringing them to our attention.

In the first one, Brian Braiker reports on a teacher using technology in the classroom. It’s a fascinating little story but one that we should take note of. A six year old girl approaches her teacher to tell him that there’s a spider in the sink. Recognising her fascination, he gathers the children round the sink and they look at the spider.

“Why don’t we check out the spider under the microscope?” he replies, perking up the rest of the students, who are enjoying free play at various stations around the room.

Ava carries the removable tub from the sink to the “teacher table,” where Pedro, 5, launches the Zoomy digital microscope, a small, egg-shaped device that connects via USB cable to the classroom laptop.

After a few minutes of observing the spider’s image magnified onto the classroom billboard, most of the students drift back to the areas where they had been playing prior to the sighting. Pedro moves to the puppet area and uses Crowell’s iPhone to film three classmates performing a show. Another student, Lindsey, remarks that the spider looks like the tap-dancing arachnid in Toca Band, the musical app the students play with on one of the classroom’s three iPads.”

This teacher has clearly embraced the power of technology into his practice. It’s evident everywhere, and the children use it all as a matter of course.

This article provides some factual information about computer use for pre-school children in the United States. Here are some of those facts.

Whilst these statistics are about the US, Britain is probably not far behind. The majority of our children are used to computers, tablets, smartphones and laptops before they start their schooling. Three immediate issues spring to mind here.

Here’s another extract from the first link “Technology in the Classroom: The good and the bad”

“Jamie Leslie is a typical 7-year-old boy. He wakes up and grabs either the family iPad or his mother’s Kindle for a little reading. After school — and violin lessons — he gets roughly 45 more minutes of screen time. Jamie loves playing with Scratch, a super-basic programming language designed by MIT that lets kids create their own interactive stories, games, music and art.

“Recently, he drew a stick-figure Justin Bieber and synched it up to music that he recorded with my phone,” says his dad…………………….Leslie [Jamie’s Dad] believes it’s the message, not the medium, that’s important when it comes to technology and his son. Jamie, for example, can get completely absorbed playing the Lego Star Wars video game.

“One way to look at it is he’s just wasting time,” says Leslie. “But for him, there are no instructions. You figure out how to do it yourself. It’s ‘how do I make my guy take over an Imperial Ship?’ It teaches logic and tenacity, and how to solve your own problems.” ”

Okay, this child may not be an average child and is certainly a fortunate child to have this technology at his fingertips, but look at that powerful statement at the end of the passage. His ‘play’ with a Lego program is teaching him without instruction – he’s figuring it out for himself, solving problems. The trick is how to extrapolate this learning and put it into other situations – and this is why the role of the teacher is so vital.

In the other article by Paul Takahashi – “Technology is the key to student achievement, former NYC school chief says”,  there’s a stimulating commentary from Joel Klein, the former New York Schools commissioner who says “ If education were a business, they would have shut it down a long time ago….. Basically what we have is a broken business.”

He goes on to comment on the amount of money that has been spent on the education system in the US compared with the country’s standings internationally. It’s disproportionate, as it is in the UK too. However, he says that spending on IT is vital and the biggest innovations in learning will come from embracing new technologies in the classroom.

Klein says that whilst tablets are quite expensive now, they will come down in price and we should invest in getting every child a tablet of their own.

This isn’t news to us. We’ve been advocating the use of this technology since it first started to appear a decade ago, but we need to act now to ensure that children have the means to develop their own learning, and returning to that point raised above, we need to ensure that those who come from a family background where tablets and smartphones are not economically affordable should at least have one in school to rebalance the disadvantages already afforded to them.

Teachers and policy makers shouldn’t be afraid. Yes, we may have to release a little control but what is wrong with that? We’ve spent too many years ignoring the voice of the child when it comes to planning their own learning. Perhaps we should listen a little more carefully and be directed by them when it comes to using technology.

In future posts we will be exploring some of the incredible programs and apps that are available free or with minimal cost to children, like an app that is similar to the ‘Logo’ and the ‘turtle’ programming technology that became available over a quarter of a century ago in schools but was largely consigned to the dustbin when the national curriculum appeared and took our inclination to innovate and to think for ourselves away from many of us. 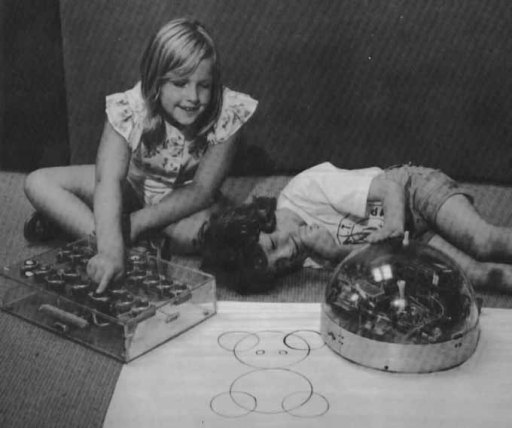 A footnote to the programmers and software sellers: Perhaps there should be a little more altruism in this growing market. Provide free apps to schools so that each 69p program can be accessed by all. It’s a case of speculate to accumulate. Children could return home having used these programs and buy them for themselves to use at home.

Gary Foskett and Clare Blackhall are educationalists, writers and consultants. We work with schools and other organisations who share our vision of how schools, businesses, etc should work in the 21st Century. We also run courses and contribute to conferences - speaking about our three dimensional model of intelligences and how schools, colleges and universities can develop the full potential of all their staff and students. We also offer consultancy for businesses and public sector organisations to support staff training and organisational change and development. For more detailed information read our blog at https://3diassociates.wordpress.com/ or see our website at www.3diassociates.com.
View all posts by 3D Eye →
This entry was posted in Uncategorized and tagged 3Di Associates, Android, Apple, Brian Braiker, creativity, Dalai Lama, Dr. Yong Zhao, education, embracing IT in the classroom, enabling learning, Galaxy Note, iPad, iPhone, iTunes, Logo and turtle, motivation, multiple intelligences, Paul Takahashi, pedagogy, personalised learning, pupil entitlement, quality teaching and learning, Rote learning, schools, tablets, teachers as facilitators, teaching and learning, technology in the classroom, The Huffington Post, Twitter, United States. Bookmark the permalink.