Where are We Going and Why? – by Hargreaves and Sahlberg

Continuing with our series of 3D Eye posts on the future of schools, and on the need to reinvent education and not just ‘reform’ schooling, we’re focusing in this piece on an article on the Whole Child Blog, written by Andy Hargreaves and Pasi Sahlberg, under the title Where are We Going and Why? We strongly recommend you read this article: http://www.wholechildeducation.org/blog/where-are-we-going-and-why 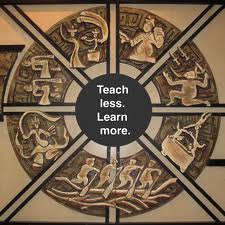 To us it’s incredible that NONE of the political parties in the UK and the USA have paid any real attention to what’s happening to education elsewhere in the world – apart from taking note of the outstanding results achieved in places like Finland, Singapore, Shanghai and Hong Kong. Neither have they paid attention to the continuing decline in children’s wellbeing in the UK and the USA – or in South Korea, which is the world leader in old-style hothousing/cramming/tests/targets/attainment schooling.

Then again, perhaps this isn’t surprising when we consider the remarks of Michael Portillo – ex-darling of the Conservative Right in Britain – in this week’s edition of the Weekly Politics on BBC2. Portillo really spilled the beans when he spoke about the games played in Parliament which have nothing to do with achieving what’s right for the nation, and everything to do with self-promotion, ego-satisfaction and increasing one’s level of  personal power and prestige.

Within that little world of political infighting there’s little regard for truth, justice and enlightenment, and total focus on self-aggradisement, and on maintaining the status quo and certain national mythologies, including those around the purposes of education and the need to continue with a 19th Century paradigm of learning and teaching. Politicians tend not to do what is right, or what is supported by research evidence, but what their inner certainties tell them will be popular with their political supporters and/or the public at large.

“Soft skills” is a very annoying term for the intelligences that underpin the full and proper development of our humanity, and whilst our current crop of politicians sometimes pay lip service to “soft skills” they clearly have no understanding of the importance of educating all of the six intelligences that enable us to reach our full potential as human beings with high levels of wellbeing.

As this week’s Horizon programme on BBC2 made clear, the over-use or exclusive use of ‘intellect’ or cognitive functioning actually inhibits human creativity, and it’s our creativity that’s crucial for our future wellbeing as a species. That, however, is another very big story, which we’ll return to in a future post on 3D Eye.

BBC2 The Creative Brain: “The advancement of humanity depends on creativity.” #education #ukedchat

Gary Foskett and Clare Blackhall are educationalists, writers and consultants. We work with schools and other organisations who share our vision of how schools, businesses, etc should work in the 21st Century. We also run courses and contribute to conferences - speaking about our three dimensional model of intelligences and how schools, colleges and universities can develop the full potential of all their staff and students. We also offer consultancy for businesses and public sector organisations to support staff training and organisational change and development. For more detailed information read our blog at https://3diassociates.wordpress.com/ or see our website at www.3diassociates.com.
View all posts by 3D Eye →
This entry was posted in Uncategorized and tagged 3Di Associates, Andy Hargreaves, British Columbia, Canada, creativity, curriculum, education, Finland, Hong Kong, intelligences, learning, multiple intelligences, Pasi Sahlberg, pedagogy, politics, pupil entitlement, teaching and learning, the future of education, wellbeing. Bookmark the permalink.

1 Response to Where are We Going and Why? – by Hargreaves and Sahlberg