Festival of Education: The Politicians Speak

The Festival of Education at Wellington gives those interested in education the opportunity to listen and speak to those who have determined policy over the decades. 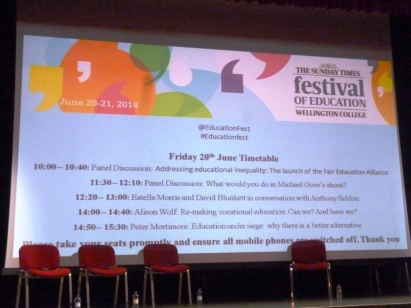 As previously reported, the first morning brought Kenneth Baker to the festival, with a healthy dose of hindsight. This was immediately followed by a conversation between David Blunkett and Estelle Morris, both Secretaries of State in the New Labour government. Talking of New Labour, Tristram Hunt was supposed to be participating in this debate but he didn’t turn up.

It’s a shame that Mr Hunt wasn’t there as he might have learned a lesson or two on how to engage with the profession should Labour win the 2015 election. For both of these politicians were extremely candid about the errors made in government – the most significant of which was their acknowledgement that they imposed changes to education rather than collaborating with the professionals who knew best.

“Done to, not done with”. That was the phrase they used, and one that many in education believe is exactly the philosophy that has been adopted by the current Secretary of State, and exactly what our children and young people have to endure through the National Curriculum and pedagogy in many of our schools.

So it was pleasing to hear both of these people saying that they thought this was a huge oversight on their part. They didn’t engage sufficiently, they said. They realise now that it looked like the politicians telling the profession what to do – which it did, and continues to do so.

David Blunkett said, “The government says that it wants schools to run schools – we were bad, this lot are worse”.

Foundations laid, Mr Blunkett. We are where we are because of what happened in the past. It can’t be ignored, but it could be put right. 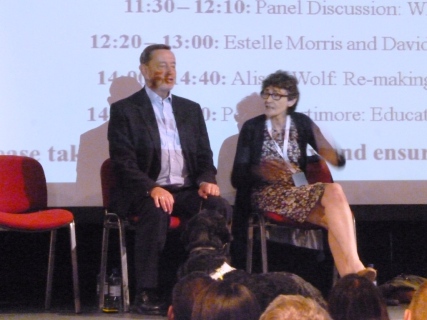 Where Blunkett and Morris were intransigent was when they spoke about standards and literacy.

Estelle Morris has never hidden her absolute belief that improved literacy will transform social mobility. She says that a fully literate population would reduce the possibility of social inequality, and this is partly why she is still committed to synthetic phonics programmes for learning how to read. However, David Blunkett, whilst continuing to say that the raising of academic standards was a major success of New Labour, concedes that we are in a situation now where we are educating “too many people for jobs they won’t have”.

We’ve raised aspirations. Great, but now we have too many people going to university – to study for subjects such as dentistry, for example, where there are too many graduates for posts available. Let’s be honest, it’s the survival of the most affluent rather than the fittest that determines who is most likely to get the job. Thus for all the academic equity, there are other factors that influence future prospects for employment, and whilst being literate and numerate is vital, it isn’t the only ingredient for reducing inequalities. Holistic policy on housing, benefits, life-long learning, and a greater emphasis on core life-skills and personal/social development in schools is needed too.

David Blunkett reiterated his view that the Literacy and Numeracy strategy worked and made a profound difference to standards in these subjects but at what cost? As Kenneth Baker said, we forgot to educate for the hands too. We would argue we also forgot to educate the mind and the soul. We forgot the individuality of the child with the truncated view that standards were the “be all and end all of education”.

Had we been allowed to ask a question it would have been something like this – The singularity of purpose for education through from Baker to Gove has major problems. Didn’t the focus on standards detract from the broader view of education and lay the foundations for Gove’s knowledge-based agenda, and how, in acknowledgement of this, should we redress the balance?

And so to the Secretary of State himself.

He appeared at Wellington in the early evening, an hour after his scheduled appearance but at least he turned up.

Where to start. What to say.

Like many who manipulate, he is so far entrenched in this behaviour that he cannot acknowledge what he is doing – i.e. distorting the truth and emphatically refusing to consider the views of others. When it comes to an outright disagreement, his final word is “It’s a difference of opinion”. End of. As if that is ever the “end of”.

He’s clever. He uses words effectively and carefully. He cites people that he says have influenced his thoughts knowing that these people are deemed significant by those who oppose him – in this case talking about the influence of Carol Dweck on his changes to accountability procedures or John Hattie on the need for more research in education. Yet if these influential educationalists are read and scrutinised, neither of them would agree with the educational stance that Gove has taken.

He flatters and commends – twice he referred to books that his companion on the stage, Sir Antony Seldon, had suggested to him.

At one point he said that he loved teachers and that he had never outwardly criticised them. He reiterated his view that we now had the best young teachers and head teachers in generations and that the English system of education was now “good with outstanding features”. He asked whether the audience thought he criticised teachers. The majority raised their hands. This particular participant didn’t because he’s more cynical in his approach than that.

He doesn’t criticise teachers. He criticises the outcomes of their teaching, thereby he can categorically say that he hasn’t’ said teachers are bad. He says he doesn’t criticise teachers but then quotes the “fact” that a third of pupils leave secondary school without a GCSE in English or tells the audience that “far too many children leaving primary school are incapable of following the secondary school curriculum”.

Now call us pedantic, but if that isn’t a criticism of teachers, then what is?

There is just one final point to make.

Is it a deliberate act on the part of Ofsted and the Department to have contrary views expressed on days like this? Is it a subtle way of reiterating that Ofsted are independent and aren’t shackled by the Secretary of State?

In the morning session, Sir Michael Wilshaw talked of the problems of a “cross curricula muddle”. In the evening, Michael Gove said that Ofsted don’t have a preferred method of teaching. Are these two comments in any way synonymous?

Both Gove and Wilshaw talked about freedom and autonomy for schools to teach what they want to teach (National Curriculum?) and how to teach yet both employ policies that make such talk of freedom at best redundant, at worst a fallacy.

The truth is exactly as David Blunkett said it was. As a profession we are “done to, not done with” and “this lot” merely grew from the foundations of autocracy that emerged from the Thatcher and Blair governments.

As one head teacher, Chris McShane, said at the Caroline Benn Memorial Lecture a couple of years ago to the then Shadow Minister for Education – Stephen Twigg, “If elected are you going to be the first Secretary of State to hand powers back to the professionals?” – or words to that effect.

Our politicians still dictate educational policy. Those who have had power and come out the other side recognise that this is erroneous. Even when there are decent policies or ideas coming from the Department, their imposition rather than collaboration deems them marked or flawed.

This has to stop.

As we have said before, Tristram Hunt…… are you listening?

Gary Foskett and Clare Blackhall are educationalists, writers and consultants. We work with schools and other organisations who share our vision of how schools, businesses, etc should work in the 21st Century. We also run courses and contribute to conferences - speaking about our three dimensional model of intelligences and how schools, colleges and universities can develop the full potential of all their staff and students. We also offer consultancy for businesses and public sector organisations to support staff training and organisational change and development. For more detailed information read our blog at https://3diassociates.wordpress.com/ or see our website at www.3diassociates.com.
View all posts by 3D Eye →
This entry was posted in Uncategorized and tagged "Done to, academies, accountability in schools, Anthony Seldon, Carol Dweck, Chris McShane, David Blunkett, Department for Education, Estelle Morris, Festival of Education, Gove criticising teachers, John Hattie, Kenneth Baker, league tables, Local autonomy for teachers, Lord Adonis, Michael Gove, National Curriculum, Not done with", Ofsted, Sir Michael Wilshaw, standards in education, synthetic phonics, Tristram Hunt, Wellington College. Bookmark the permalink.