A Week is a Long Time in Education

“A week is a long time in politics” – quote attributed to Harold Wilson.

“A week is a long time in education”

It’s always a long week in education . . . but some are longer than others. In the penultimate week of this lengthy autumn term, schools should be focused on Christmas festivities and fun as well as completing planned work. It should be a time of celebration . . . for the children, however old they are.

This week, however, has been crammed full of educational pronouncements, comments and complaints, concluding with the annual festivity of the publication of primary schools league tables.

Here’s what educationalists have had to endure this week – and these are just the headliners.

In addition to these major issues, we’ve also had the Secretary of State indicating her approval for the first new grammar school in 50 years. We’ve had reports about excessive homework in the UK and further reports about growing inequalities from the OECD, plus alarming news of lobsters, spacemen and Elvis playing integral parts in “traditional” Nativity plays.

This is the world of education.

It’s a constant bombardment of new ideas and concerns – some of which are positive, others perhaps detrimental to both children and teachers; all of which are pronouncements from “above” rather than initiated or instigated by the professionals in the classroom.

It’s frequently said – but which other profession would endure the constant edicts from politicians as to how they function and operate professionally? What would surgeons say to Jeremy Hunt if he prescribed the methods and means of surgery, including which instruments had to be used? Would a lawyer accept legislation that dictated which books they should use as reference to criminal cases? Would an architect comply with interferences in their designs which go beyond the accepted planning policies?

Have any of these other professions had their week filled by suggestions, attacks and “critical” advice? Will these professions get another bombardment as soon as the Christmas holiday season is over?

A week is indeed a long time in education. Blink and you’ll miss the latest implications for your practice. Concentrate on the children in front of you and you might fail to read the most recent guidance from the Department of Education. Have a bad day and if Ofsted are on the scene, you might find that the Secretary of State has acted on one of the 50+ new powers given to her by her predecessor’s strait-jacket of legislation.

We’ll look at each of the four key issues outlined above in greater detail in future posts, but there are two overriding comments that are sadly common to all.

Firstly, these reports and suggestions all come from people who have either never or no longer work in schools.

Tristram Hunt is right to highlight the importance of personal and social development of pupils, even if it is couched in the stiff upper lip language of British values and Churchillian character building. Whilst Tristram Hunt has some done a little teaching, he’s a politician who has no experience of teaching anywhere other than post 18 education.

Nicky Morgan? Never taught, and neither did her predecessor.

League tables and the suggestion for a particular type of College of Teaching  came from civil servants in the Department of Education – many of whom haven’t got a teaching qualification. Whilst we know that the notion of a professional body for teachers has been suggested by teachers, they have no power to introduce this unless politicians allow them to do so.

Admittedly, Sir Michael Wilshaw was a practitioner – but Ofsted has failed to prove its independence from government, and it has a specific educational agenda.

The other comment is that “it’s all about the standards, stupid”.

Just as with Clinton saying it’s all about the economy and that eventually everything comes back to money, then so too is it with education and ‘standards’.

The College of Teaching has been suggested as a means to raise standards. The politicians realise that politically, they need to stop dictating to the profession – but the agenda is still firmly focused on standards alone. We’re all for support and funding for continued professional development but we sincerely hope that this will include a wider view of education and will incorporate training on wellbeing, on personal and social development and the importance of the ethos and environment of the school, with reference to successful holistic practices in other countries.

In his speech on Monday, Tristram Hunt rightly pointed out that the omission of work on key life skills (thank you again Tristram for no longer using the term “soft skills”) has been “unintentionally harmful”.

Here’s an important quote from him.

“Resilience, curiosity, discipline, self-control, and grit; whether at school, home or work, the evidence seems to suggest that possessing these skills in abundance is a crucial determinant of life-long success. Even more so, in fact, than pure academic attainment . . . Because though nobody could possibly argue that striving for attainment is anything other than a noble aspiration, the evidence in support of character education throws up an even more arresting contention. And this is the crucial question education reformers must now answer . . .

“What if we’ve been getting it wrong? What if our efforts have led to some to pretty harmful unintended consequences? That in our determination to floor the attainment accelerator we have unwittingly overheated the engine? Wasting the most precious resource this country has – the talent of our young people – in the process.”

This is fantastic, but unless Tristram has had a Damascus-like moment in recent days, the focus for all parties has been the “attainment accelerator” and continues to be so. Some have even said that character education is a good idea because it will add to and support attainment. That may well be the case – but it’s crucially important and valuable in its own right.

It shouldn’t simply have worth because it’s supposed to contribute to raising attainment.

As for the league tables and the Ofsted Annual report, well, their entire raison d’être is standards, standards and standards.

That was the week that was, and all of this in a week in which we saw the youngest-ever recipient of a Nobel Peace Prize. Whilst Malala Yousafzai campaigns for universal rights for every child to be schooled and whilst she is an advocate of “standards”, she is also the epitome of the necessity of “character” education too. 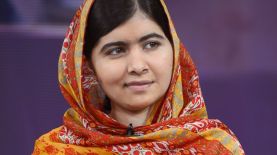 It was also the week that including International Humans Rights Day. Anyone seen that mentioned in the curriculum?

It was a week which saw the unveiling of a statue to celebrate and commemorate the “Christmas Truce” football match – designed by an imaginative young lad from Newcastle upon Tyne. Ten year old Spencer Turner obviously attends a school where creativity is seen as important as its 100% reading and writing scores.

Perhaps it’s these areas of education and these accomplishments that we should really be noticing – and celebrating.

Gary Foskett and Clare Blackhall are educationalists, writers and consultants. We work with schools and other organisations who share our vision of how schools, businesses, etc should work in the 21st Century. We also run courses and contribute to conferences - speaking about our three dimensional model of intelligences and how schools, colleges and universities can develop the full potential of all their staff and students. We also offer consultancy for businesses and public sector organisations to support staff training and organisational change and development. For more detailed information read our blog at https://3diassociates.wordpress.com/ or see our website at www.3diassociates.com.
View all posts by 3D Eye →
This entry was posted in Uncategorized and tagged 3Di Associates, A week in education, Bill Cinton, character education, Christmas celebrations in school, Christmas Truce scultpure, College of Teaching, Harold Wilson, Malala Yousafzai, Nicky Morgan, Ofsted Annual Report 2014, personal and social development, personal and social development in schools, personal intelligence, Primary League tables, Sir Michael Wilshaw, Social Intelligence, Tristram Hunt, values, wellbeing. Bookmark the permalink.