It’s hard to forget New Labour and its “Education, Education, Education” mantra which created a feeling of optimism that soon turned to despondency – once we realised what Blair and co meant by “education”. They were talking almost exclusively about attainment in high stakes tests and examinations.

We are where we are, and as we’ve said in our previous election 2015 posts, this is largely thanks to New Labour and the policies that led to and facilitated the Gove ‘reforms’.

Recently however, the rhetoric has changed – as outlined in a previous post – with Tristram Hunt making comments about the detrimental effects of high stake tests and the consequences of political interference in education. He’s also shared a vision for the real purpose of education – presumably one the Labour Party agrees with

“The days of education by diktat must come to an end . . . . The idea that our children’s potential can be fulfilled if we  just raise the targets, stamp our feet and demand one more heave, is now, surely, approaching its end stages . . . We can put an end to the endless tinkering with accountability, performance measures, curriculum, assessment criteria.”

So how does this vision fit with the Labour Party’s education election manifesto?

You can view the manifesto here.

The full version is here. Scroll to page 31 and 38 for education statements

3Di comment: We agree with the first sentence in the manifesto which says, “The early years of a child’s life are critical – this is the time children acquire the physical, emotional and cognitive skills that will set them up to succeed once they reach school and beyond”. That’s why it’s so important to get it right and why it needs substantial funding to do so. The forward thinking secondary head teachers who created the Headteachers’ Roundtable group agree that without proper funding in Early Years, their job is more difficult. The childcare pledge has been given before. It was part of the Every Child Matters agenda with the Extended Schools programme. Labour would do well to evaluate its successes and its failings should they be elected.

[NB – looking at that quote above, it still amazes us that previous governments and some of our teachers don’t seem to understand that “physical, emotional and cognitive skill development” alongside social, personal and spiritual learning is something that should be developed from the well-named “Foundation Stage” and throughout a child’s 13 year life in schools]

3Di comment: This is looking familiar – “drive up standards”. Let’s be clear, pedagogical thought may differ but every teacher wants children to achieve the very best for themselves. [It’s an erroneous notion that “progressives” are only concerned with wellbeing and with child-centred learning and that “traditionalists” only use a chalk and talk method of teaching]

When it comes to individuals there is no “standard”, which is one of the reasons we’d prefer the proposed “directors” to be called “Directors of School Effectiveness” and have oversight of education in the round – not just “standards”. Expectations for learning and entitlements to learn are crucial, but they need to be expectations for the very wide range of learning that children should have access to, not merely their attainment in examinations.

The fact that certain authorities have more “failing” schools than others is something that needs to be addressed, but this requires holistic social policy change and not an expectation that schools can do everything regardless of economic and social circumstances. Whilst we agree that private schools should have an altruistic component, not every private school is as outstanding as Eton or Wellington, and therefore may have little or nothing to offer state schools. Should the relief from business rates be conditional on them providing solid evidence of their value as ‘partners’? 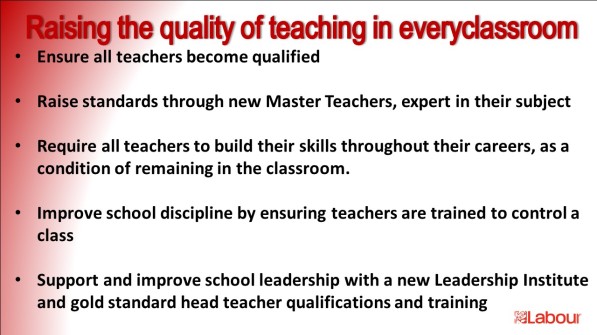 3Di comment: Yes to qualified teachers, yes to continued professional development, yes to Masters Degrees as part of this. Yes to support for teachers who struggle to manage (not control) a class. These are all important proposals to raise the skills, status and profile of teachers and to ensure that every child has access to a well-trained teacher committed to learning and improving their own skills.

We agree with Labour’s pledge to support a newly established College of Teaching and also agree with the strengthening of Initial Teacher Training when it comes to behaviour management. We also agree that Leadership is important. Autonomy and opportunities to share good practice are important too, but as we said with the Liberal Democrats, any incoming government should be careful of Quango-building, especially if it’s just another means of political control on education.

Here again, however, we have memories of times gone by. The suggestion of a Master Teacher doesn’t sound too dissimilar to New Labour’s Advanced Skills Teacher – merely an addition of a qualification. Behavioural Support Programmes and training with a CPD qualification were also introduced by New Labour. If there’s going to be commitment to such programmes again, they can’t be thrown out every time a new Prime Minister enters Downing Street. If they’re so important they can’t be at allowed to be at risk in the next round of austerity cuts either.

3Di comment: We’re not sure about all this “gold-standard” language – here for the second time. It really isn’t necessary. Gold stars may encourage some youngsters to achieve the best they can but it’s somewhat disconcerting and even patronising to expect professionals to raise their game for a gold placard to put in the foyer of their school – isn’t it? Likewise with the Technical Baccalaureate mentioned here.

What we’d like to see is a pledge that a Technical Baccalaureate will be given the same credence as a set of good A-Levels – and the introduction of new Technical Degrees will certainly help with this. What we’d like to see is a commitment to abolish 16+ exams in a time when all young people have to stay in one form of education or training until they’re 18. What we’d like is for the Labour Party to reconsider the recommendations of the Tomlinson report and the suggestions for post-14 schooling from the Headteachers’ Roundtable.

Stability in the secondary sector is important but the current system is anachronistic and too highly focused on academic attainment, and disregards the fact that many of our young people don’t want to pursue or haven’t the attributes to pursue formal academic education to the age of 18. Every political party has now recognised this fact, and though they won’t admit it, it’s mainly thanks to Ed Miliband’s brilliant “Forgotten 50%” speech at the Labour Party conference of 2012.

3Di comment: Up until now, the mantra has had a very familiar ring to it. Standards, gold ones at that, qualifications, raising the game, Master teachers. This isn’t sounding like the passionate speech that Tristram Hunt delivered at the ASCL conference earlier this spring. Finally, with this last set of proposals, we’re beginning to see that passion turn into pledges.

We’d agree with the age-appropriate SRE but we want this extended to cover all areas of PSHE and can’t really understand Labour’s indecisiveness and reluctance to do just that. And we want to see the word “statutory”.

In the manifesto in full, it says “To equip our young people with the knowledge they need to stay safe and healthy we will introduce age-appropriate sex and relationship education in all schools and ensure teachers are better trained to identify mental health issues”.

This isn’t clear enough. SRE is already in schools. There’s already a statutory duty to promote wellbeing, which may or may not be adhered to as far as curriculum provision. This should be an entitlement for all children and therefore needs the word “statutory” or “must” rather than “should” – a key omission from Gove’s new national curriculum.

As for mental health, we want more than mere ‘identification’. We want a commitment to helping young people deal with mental and emotional wellbeing issues – through a mandatory PSHE education curriculum. We want a full acknowledgement that the pressure of high-stake exams is a significant contributory factor to an increase in self-harming in a none-too-small minority of “academically able” young people – and then action according to this information.

This is a start but it’s by no means the end. And whilst we’re on the subject of reinvention, if Labour are considering reintroducing some of their more successful previous policies, what about Healthy Schools?

There’s little to disagree with in the majority of these pledges but there’s also little to excite.

We can’t cherry-pick initiatives that worked well before without having a very clear picture of why they didn’t work, and as we’ve said countless times, part of the failure of the previous Labour government’s education policy was that it paid lip service to four of the five Every Child Matters outcomes – with the standards agenda of “achieve” becoming the be-all and end-all of education.

We need change  – not more of the same. Careful appraisal of the past is vital to inform the next steps for an education system that’s fit for purpose in the 21st century. We believe Tristram Hunt has worked hard to appraise himself of the need to redesign our system of education and to put its future direction back in the hands of professionals. It’s possible he’s been restrained from saying so in his party’s manifesto by Labour’s election strategists. We sincerely hope for progressive change that’s delivered by politicians in collaboration with the teaching profession and not simply imposed on it after the election.

Gary Foskett and Clare Blackhall are educationalists, writers and consultants. We work with schools and other organisations who share our vision of how schools, businesses, etc should work in the 21st Century. We also run courses and contribute to conferences - speaking about our three dimensional model of intelligences and how schools, colleges and universities can develop the full potential of all their staff and students. We also offer consultancy for businesses and public sector organisations to support staff training and organisational change and development. For more detailed information read our blog at https://3diassociates.wordpress.com/ or see our website at www.3diassociates.com.
View all posts by 3D Eye →
Gallery | This entry was posted in Uncategorized and tagged 3Di Associates, College of Teaching, Directors of School Standards, Early Years Education, Ed Miliband, Ed Miliband's speech on the Forgotten 50%, education, Eton, Extended Schools programme, Headteachers Round Table, Healthy Schools, high stakes testing, high-stake exams, Labour, mental health, multiple intelligences, New Labour, One Nation, One Nation politics, PSHE, SRE, Statutory PSHE and SRE, Sure Start, technical baccalaureate, Tomlinson Report, wellbeing, Wellington College. Bookmark the permalink.