Highbury Grove School in Islington has a very special place in my personal and professional memories. Back in the mid 1970s I worked there for the ILEA during a stint as an unqualified supply teacher. I’d assumed supply teachers were moved around from school to school to cover for staff absences, but no – I was there for the duration. On account of staff shortages as well as staff absences there was a permanent pool of supply teachers, which was to become my peer group and support group for several months whilst I was waiting to start a PGCE at Goldsmiths. I soon discovered why the Remedial Department was short of staff. And when the headteacher offered me a teaching post and said the school would train me to QTS, I politely declined.

The school opened its fine new buildings in 2009 – 3Di had a brief look inside when we attended a meeting of the Heads Round Table there a few weeks ago. Tom Sherrington has been the head of Highbury Grove since last September. Tom has worked in a wide range of schools, including Holland Park Comprehensive and King Edward VI Grammar School, Chelmsford, before taking up this interesting and challenging post. He’s a founding member of the Headteachers’ Round Table and a well-known blogger and tweeter. He’s also prepared to speak truth to power, as shown in this important blog post which he addresses to the Secretary of State for Education.

For us this is a key paragraph:

“There’s a constant ‘gun to the head’ feeling that I could really do without. I was very concerned with the rhetoric being used in relation to primary Heads and times tables. I’m sure you have a sense that this job is difficult enough without thinking you’ll be sacked if the data doesn’t pan out as you’d hope? Personally, I feel quite secure at the moment. I’m new in post; I’ve got time and I’m experienced enough not to jump left and right every time a new tweak is made to the OfSTED framework. Actually, I feel Heads can and should step up to lead change with more confidence. But, as Secretary of State, you have so much influence in creating the climate where more Heads could express that confidence – not just hide within the safety zone of compliance. Please do all you can to set us free to unleash greatness. Putting the guns down would be a start. Take a look at OfSTED and let’s move forward on the intelligent accountability agenda.”

We need a lot more heads, teachers and parents to join with Tom Sherrington in speaking out on the issues he’s raised – if we’re to achieve what’s right and equitable for schools, teachers, students and families. 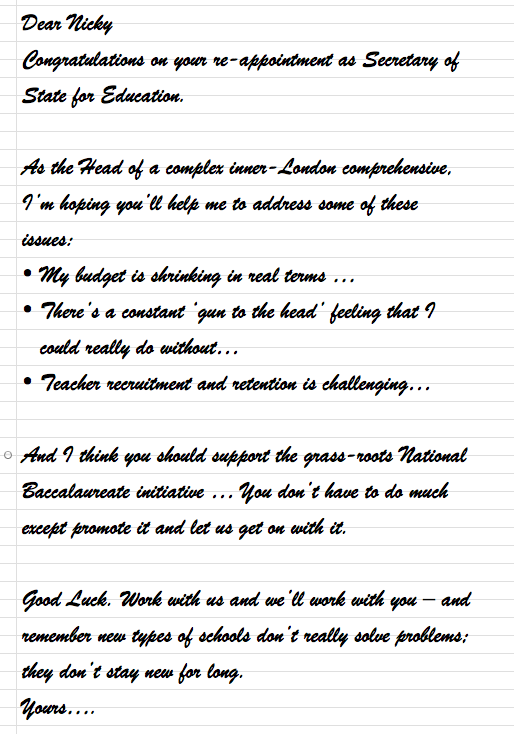 Congratulations on your re-appointment as Secretary of State for Education.  Education Policy had rather a low profile in the General Election, but I’m sure  you’ll be returning to the DFE with renewed determination to put Education at the centre of the agenda for the new Government.  To some extent, you and your predecessor put enough changes in place to keep us busy for five years so don’t go crazy looking for things to do!

The examination and curriculum changes take up a lot of institutional energy and, above all else, we simply need time to get those things right. I’m actually quite happy about the move to terminal exams and the removal of the less robust elements of GCSEs: the ‘discourse of gaming’, as Brian Lightman has called it, never did us any good.  I’m looking forward to 2018 when all the GCSEs have converted and we’re not dealing…

Gary Foskett and Clare Blackhall are educationalists, writers and consultants. We work with schools and other organisations who share our vision of how schools, businesses, etc should work in the 21st Century. We also run courses and contribute to conferences - speaking about our three dimensional model of intelligences and how schools, colleges and universities can develop the full potential of all their staff and students. We also offer consultancy for businesses and public sector organisations to support staff training and organisational change and development. For more detailed information read our blog at https://3diassociates.wordpress.com/ or see our website at www.3diassociates.com.
View all posts by 3D Eye →
This entry was posted in Uncategorized and tagged capability, education, Headteachers Round Table, Highbury Grove School, Nicky Morgan, politics, professionalism, respect, schools, targets, threats, Tom Sherrington. Bookmark the permalink.