Before publishing our thoughts on Sir Ken Robinson’s latest book “Creative Schools: Revolutionising Education from the Ground Up”, we’ll make a brief comment on education bloggers and their opinions. 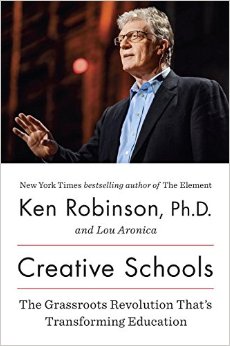 Anybody who goes to the trouble to write at length about education evidently cares about it. Be it from a “traditionalist” or a “progressive” stance – or indeed an amalgamation of these so-called camps in education – nobody should doubt their commitment and passion to their particular view of education.

However impassioned one feels, though, it’s helpful to refrain from vitriol.

Sir Ken Robinson is a dedicated educationalist – a man who is wholly committed to an ideal of a better education for all. To slander and abuse him (and indeed other writers who object to the GERM mentality) is completely unwelcome and unnecessary, and we are most disheartened by some of the nastier, more vindictive reviews that we’ve come across in the course of our research for our posts.

(NB we’re not going to give them publicity by republishing them here. Go google!)

As Ken Robinson quite rightly says in his book, “People do not come in standard sizes or shapes, nor do their abilities and personalities . . . Every individual is unique. We all differ physically and in our talents, personalities, and interests.” Thankfully we are diverse and different, but we can also remain civil, even in disagreement.

Some commenters have said that Sir Ken’s most recent book isn’t necessarily “new”, in so far that it’s largely a reiteration or a book form of the hugely significant and highly watched TED Talk “How Schools Kill Creativity” of 2006 and the RSA Animate Changing Education Paradigms.

(Here is the transcript for the Ted Talk.)

There are three points to make.

Firstly, there’s plenty of new material, ideas and anecdotes within this book that clarify and explain Sir Ken’s particular view on how to be more creative within the education system. We shall be referring to some of these in subsequent posts. So no, it isn’t a complete regurgitation of what he’s said in the past.

Secondly, as Sir Ken says, education is organic. It’s constantly evolving (frequently in ways that aren’t welcome as far as many of us are concerned). That’s why so many of us who blog about education have plenty to say – because there are so many new announcements and proclamations about education. A comment made in 2006 might still be pertinent to education in 2015 but it has a different resonance when one considers that we haven’t had an alteration to the “educational paradigm”. Rather we’ve had an increase in the high-stakes testing mentality that Sir Ken Robinson criticised in his TED Talk nearly a decade ago.

Following on from this is our third point. Whatever Sir Ken Robinson says now is still relevant, and sadly, is still ignored by policy makers on both sides of the Atlantic. Is it any wonder that he might feel a need to reiterate his points when we still have systems that for the most part disregard creativity – both for and within the individual, and within Arts subjects? As Michael Rosen said in his monthly “letter” to the Secretary of State (in the Guardian), “I say “the arts” suffer, but I mean “the pupils”, squeezed out of benefiting from the kinds of participatory, collaborative, creative work the arts offer.”

When nothing changes, except for the worse, we need to speak about it.

“Creative Schools” is an important book. For one, it captures what should be the real aims of education in a succinct and easily digestible style – a timely reminder of the purposes of education in this exam-ridden Summer term. Secondly, it concentrates the mind and reminds those of us who do feel a certain amount of despondency that there are like-minded people in the world who are also trying to shift the paradigm and that eventually, hopefully, the practices of the few will become those of the many.

Personalised learning in 2006 was almost an unreachable Utopia. That’s not the case any longer.

What this book offers is an affirmation, and indeed a call for change.

“You need three forms of understanding: a critique of the way things are, a vision of how they should be, and a theory of change for how to move from one to the other……….. But revolutions don’t wait for legislation. They emerge from what people do at the ground level……… If you’re involved in education in any way you have three options: you can make changes within the system, you can press for changes to the system, or you can take initiatives outside the system……..What I’m arguing for is not hypothetical. It’s based on long experience and study of what works in education, what motivates students and teachers to achieve their best and what does not. In doing this, I stand in a long tradition. The approach I’m recommending has deep roots in the history of teaching and learning since ancient times. It is not a fashion or trend.

The answer is not to do better what we’ve done before. We have to do something else. The challenge is not to fix this system but to change it; not to reform it but to transform it.”

We all have the potential to change and as we’ve said ourselves, in a previous post, education needs to be reinvented not reformed.

So if it takes a new book from Sir Ken Robinson to offer a healthy reminder that there’s still a campaign to be fought, then that in itself is a commendable purpose.

Over the next couple of weeks we’ll comment on the book in more depth and detail.

For now, we’ll finish this post with Sir Ken’s comments on the basic purposes of education – something that we’ll review thoroughly tomorrow.

“[Four basic purposes of education: personal, cultural, social, and economic.] As I see it, the aims of education are to enable students to understand the world around them and the talents within them so that they can become fulfilled individuals and active, compassionate citizens.”

Gary Foskett and Clare Blackhall are educationalists, writers and consultants. We work with schools and other organisations who share our vision of how schools, businesses, etc should work in the 21st Century. We also run courses and contribute to conferences - speaking about our three dimensional model of intelligences and how schools, colleges and universities can develop the full potential of all their staff and students. We also offer consultancy for businesses and public sector organisations to support staff training and organisational change and development. For more detailed information read our blog at https://3diassociates.wordpress.com/ or see our website at www.3diassociates.com.
View all posts by 3D Eye →
This entry was posted in Uncategorized and tagged 3Di Associates Reinventing Education, 3Di Associates: Rearranging the Deckchairs, Changing Education Paradigms, creative schools, Creative Schools: Revolutionising Education from the Ground Up, Education bloggers, GERM, How Schools Kill Creativity, Michael Rosen, Michael Rosen's Guardian letters to SoS, Progressive Educationalists, Sir Ken Robinson, Sir Ken Robinson's "Creative Schools", Ted Talk, Trraditional Educationalists. Bookmark the permalink.