The Purpose of Education: An Overdue Conversation

Are we ever going to get education right if we can’t agree on its aims and purposes?

Are the purposes espoused by some diametrically opposed by others? Isn’t there some synergy worth considering that will unite all educators? 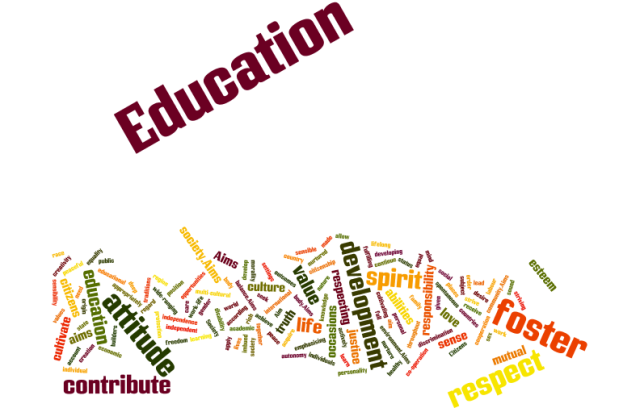 Naively sometimes, one assumes that those interested in education are interested in the development of the whole person, the whole child, and yet we still have an education system that concentrates on one aspect, one intelligence – intellect; academic success, elevating its significance to the “be all and end all” of education.

“For many people, it seems “academic” is a synonym for “intelligent” and “academic success” for “educational achievement.” Properly conceived, “academic” has a more limited meaning. It refers to intellectual work that is mainly theoretical or scholarly rather than practical or applied . . . Human intelligence embraces much more than academic ability: it suffuses all the achievements that are manifest in the arts, sports, technology, business, engineering, and the host of other vocations to which people who are alert to them may devote their time and lives.”

“Profound things can happen when students are given room to explore their own interests and capacities.”

Profound things can also happen when adults are given room to explore their own interests and capacities. Add to that a healthy dose of altruism, empathy, thoughtfulness together with connectivity, collectivism, collaboration and we may start to see the changes that so many of us want.

An image, a photograph, a scene from a film, a song, a quote from a book can be the catalyst for creativity and ultimately change. If there is only one purpose in reading Ken Robinson’s work, it should be this – that it becomes a catalyst for creativity and change, and we start to use all of our intelligences thoroughly to consider the purpose of education, which embraces all of the intelligences too. Once that is achieved, the rest should flow from there.

To make progress with this, there needs to be some unity and agreement. 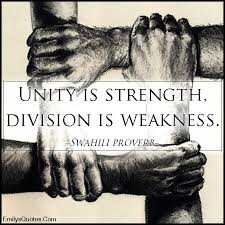 In this post-election time, it’s often said that one of the reasons that the “Left” (whatever party that may be) didn’t get its message across is because they don’t talk to one another. A more accurate conclusion would be that they may not listen to one another.

We are all individuals and as such we have our own unique set of values and beliefs but we are never going to get anywhere in education by focusing on what separates us rather than what unites us.

We need to talk and we need to listen. 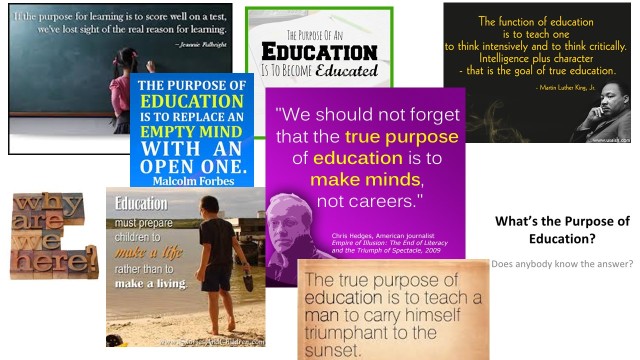 Sir Ken Robinson says that he believes there are four main purposes for education – personal, social, cultural and economic.

Whilst many might disagree with some of these aims, it’s a great starting point for a discussion and it certainly refutes the notion that schools should wholly concentrate on one aspect – academic attainment.

It also proffers a focus on the individual rather than the system.

“The problem with conformity in education is that people are not standardised to begin with”.

Each and every one of us – child and adult alike – needs the opportunity to engage in the world within us and around us, to learn to become or to be more compassionate and empathetic, to be appreciative of our own and others’ needs and to be financially independent. And yes, we need to be numerate and literate too.

What strikes us though about these aims is that they’re somewhat familiar, though all too frequently ignored. 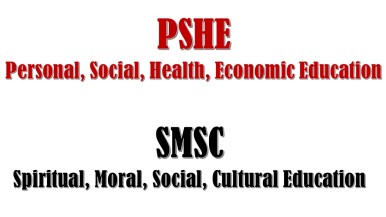 We already have these aims in an unwritten educational constitution but because they’re either non-statutory or not judged in our current measures of accountability, be that Ofsted or examinations, then they are seen as second class or third rate compared with the current ultimate aim of education – standardisation.

To concentrate our thoughts and actions on these other aims of education would upset the status quo.

Quite rightly it would.

That’s part of the reason that we’ve witnessed the demise of the Healthy Schools Programme and Creative Partnerships, ECM, SEAL, and so on. 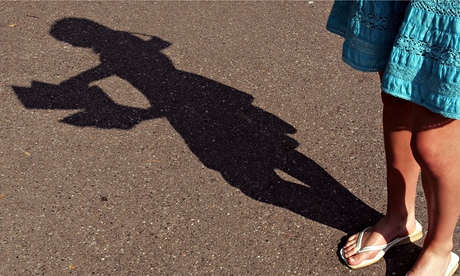 It’s examination time. When our 18 year olds receive their A-level results on Thursday 13th August this year, maybe we should ask them whether their personal, social, cultural and economic needs have been met through their thirteen years of the standards agenda.

Have they had consistent personal, social, health and economic education – that the Secretary of State says should be happening in every school? Has the breadth of spiritual, moral, cultural and social education impacted on them to carry with them now and into life? Can they even answer these questions due to the lack of focus on these areas of education?

Do they know themselves what they want to do – now and in the future? Have they had opportunities to explore their passions, their interests? Has their love of and ability to create pieces of art or their ability to take photographs, to sing, to carve a piece of wood, to make an electrical circuit been recognised as worthy? Have they had real and frequent opportunities to collaborate, to communicate, and to think critically beyond the constraints of their coursework?

If even 10% of students answered “no” then we would have a crisis of purpose in education. That potentially 90% of them would answer “no” to these questions demonstrates to us that the current aims of education are inherently wrong. 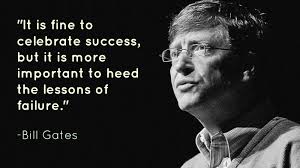 “The work of electricians, builders, plumbers, chefs, paramedics, carpenters, mechanics, engineers, security staff, and all the rest (who may or may not have college degrees) is absolutely vital to the quality of each of our lives. One effect of the emphasis on academic work in schools is that the education system is not focused on these roles and typically considers them second-rate options for people who don’t make the academic cut.”

How do young people who want to be electricians, carpenters, chefs etc feel about this?

“In 2008, IBM published a survey of what characteristics organization leaders need most in their staff. They spoke with fifteen hundred leaders in eighty countries. The two priorities were adaptability to change and creativity in generating new ideas.”

It’s not just the “usual suspects” of child-centred educators that are saying this any longer. IBM, the CBI, former Secretaries of State like Ken Baker. . . . . .  the list goes on.

“The nongraduation figures are stark enough. But they don’t take into account the millions of other students who stay in education but are bored and disaffected by the whole process.”

“If we think of students as products or data points, we misunderstand how education should be. Products, from screws to airplanes, have no opinions or feelings about how they are produced or what happens to them. People do. They have motivations, feelings, circumstances, and talents.”

Seriously, it makes one weep.

Another quote from Ken Robinson that we used in our previous post is worth reiterating with its accompanying conclusion. . . .

“People do not come in standard sizes or shapes, nor do their abilities and personalities. Understanding this basic truth is the key to seeing how the system is failing— and also how it can be transformed.”

This is why we still need to have the conversation about the aims of education, and why we also need to consider human intelligences thoroughly – finally breaking with the false interpretation of “intelligence” as intellect alone.

Gary Foskett and Clare Blackhall are educationalists, writers and consultants. We work with schools and other organisations who share our vision of how schools, businesses, etc should work in the 21st Century. We also run courses and contribute to conferences - speaking about our three dimensional model of intelligences and how schools, colleges and universities can develop the full potential of all their staff and students. We also offer consultancy for businesses and public sector organisations to support staff training and organisational change and development. For more detailed information read our blog at https://3diassociates.wordpress.com/ or see our website at www.3diassociates.com.
View all posts by 3D Eye →
This entry was posted in Uncategorized and tagged 3Di Model of Intelligences, A levels, aims of education, CBI, Cultural Education, Economic education, high stakes exams, Human Intelligences, IBM, Moral Education, PSHE, PSHE Education, Sir Ken Robinson, Sir Ken Robinson's "Creative Schools", SMSC, Social Education, spiritual education, standards agenda. Bookmark the permalink.

3 Responses to The Purpose of Education: An Overdue Conversation