Does our Education System Contravene the UN Convention on the Rights of the Child?

Does our education system contravene the United Nations Convention on the Rights of the Child?

In theory, it may not do. In practice, it’s a different matter.

The UN Convention on the Rights of the Child was signed in 1989 on the 30th anniversary of the Geneva Declaration on the Rights of the Child. 196 nations have currently adopted it, with one notable exception – the USA. However, the number of children who are aware of this convention and know their rights appears to be minimal, possibly because it’s not compulsory to study it in schools.

What strikes us as particularly pertinent is that amongst the 54 articles in this document, there’s a wealth of statements that could unify education, placing the wellbeing, growth and safety of children at the heart of its aims and objectives – in all countries. It’s preposterous that we choose to ignore it when legislating for changes that are supposed to benefit all children.

Let’s look at the core articles relating to education. 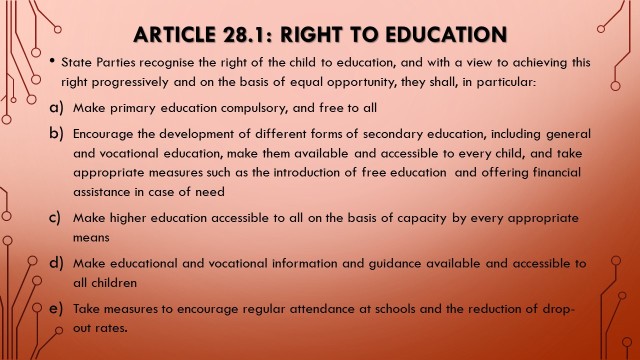 Article 28.1 (Right to Education) is very similar to the UN Declaration of Human Rights: Article 26 which we reviewed yesterday. However, there are two further points to make on access to education and careers advice.

Firstly, the coalition government chose to scrap the Education Maintenance Allowance for pupils in England which, in line with Article 28.1 was “offering financial assistance in case of need”. No alternative has been provided.

Secondly, whilst careers advice is still statutory, it’s now the responsibility of each school to provide this important area of work rather than a unifying organisation that worked nationally, and whilst they are encouraged to provide careers advice, academies and free schools are free from this obligation – hardly “accessible to all children”. 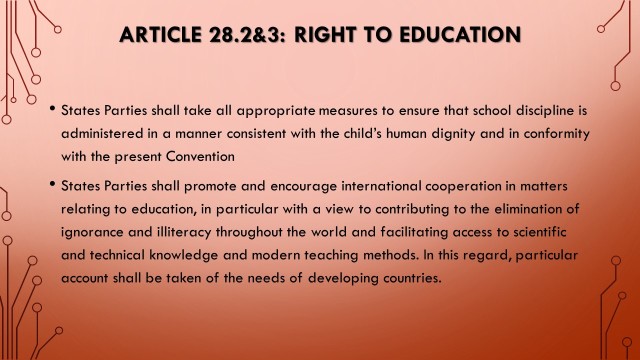 Article 29 – the goals of education – makes a very clear statement regarding the fundamental aims of education. 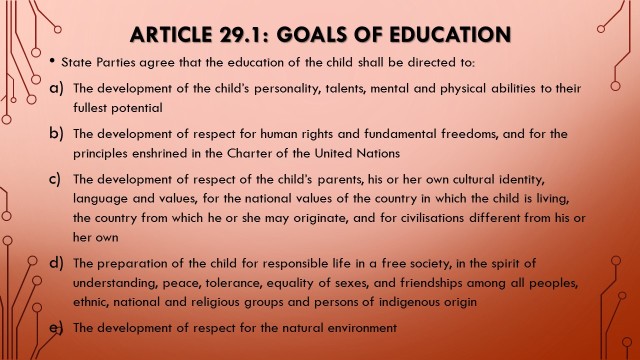 The article concludes with the following statement.

“No part of the present article or Article 28 shall be construed so as to interfere with the liberty of individuals and bodies to establish and direct educational institutions, subject always to the observance of the principle set forth in paragraph 1 of the present article and to the requirements that the education given in such institutions shall conform to such minimum standards as may be laid down by the State.”

Let’s be very clear about how important this is.

The internationally agreed purpose of education is to develop “the child’s personality, talents, mental and physical abilities” plus the “elimination of ignorance and illiteracy. . . . and facilitating access to scientific and technological knowledge and modern teaching methods”.

And all this should be done “with the liberty of individuals and bodies to establish and direct educational institutions” to enable them to provide an education that develops the “child’s personality, talents etc . . . . . .”

And now to the crunch statement “requirements that the education given in such institutions shall conform to such minimum standards as may be laid down by the State”.

There’s a feasible argument that the current legislation for England does not develop the child’s whole personality or, as 3Di would say, all of their intelligences. It’s feasible to say that the “minimum standards” – with the government’s refusal to make Personal, Social, Health and Economic Education compulsory – contravenes the goals of education outlined in Article 29.

Our education system is not fit for purpose according to the Convention on the Rights of the Child.

Interestingly, there’s no mention within this convention of high-stake exams or a need to get 5 A-C passes at the age of 16 in subjects that the State has chosen as important. On the contrary, it says that we should be doing all we can to develop a child’s personality and talent – where presumably some children are talented linguists and others are potentially talented artists or musicians or scientists or carers or bus drivers or plumbers or carpenters.

There is a clear mention of the development of a child’s mental and physical abilities – a duty to ensure that they are mentally and physically well, something that the government may wish to consider when they look at the news this week of the National Union of Students survey on Mental Health. 78% (8 out of 10 students) say they experienced mental health issues in the last year.

Does this fact correlate with the article 29 statement that State Parties agree that the education of the child shall be directed to “the preparation of the child for responsible life in a free society” or “the full development of the human personality”?

One could argue that we all suffer from mental anguish from time to time, but this NUS survey conveys a clear message that young people’s mental health is not in a good state. If we’re not enabling young people to cope when this happens, then we’re failing them and not complying with the UN Convention.

And another question – how can this particular State say that they are educating for the development of “respect for human rights and fundamental freedoms” if they don’t legislate for time to teach about the UN Convention on the Rights of the Child? Talking about “national” or British values is NOT enough.

Not putting the Convention on the National Curriculum contravenes Article 42: Knowledge of Rights.

Let’s look at that “Right to be heard”

“State Parties shall assure to the child who is capable of forming his or her own views the right to express those views freely in all matters affecting the child.”

Do we do this in education? Do we allow young people a voice? Do we act on their views when they’re allowed to speak?

The UN Convention for the Rights of the Child demonstrates a commitment to education that goes far wider than the attainment of academic results. Our education system says that the curriculum offering should be “broad and balanced”, mindful of the spiritual, moral, social and cultural development of the child, but then refuses to legislate for time in the curriculum for the very personal development that’s mentioned within the convention.

Our children and young people, like adults, are not two-dimensional. They’re three dimensional – with six core intelligences that need to be developed and managed – intellect, instinct, personal, social, physical and spiritual. Ignoring the development of any one of these intelligences defies the UN Convention on the Rights of the Child and makes our education system flat and two dimensional rather than being the complete, purposeful mechanism to nurture the development of our children’s human personality.

There’s more on education within the UN Convention on the Rights of the Child that we’ve referred to in previous posts.

There’s also more within the Convention that’s particularly pertinent to education – be it the rights of the child or how all schools, local authorities and governing bodies manage and comply with those rights.

A summary of these will be posted tomorrow.