Academies – Democracy, Autonomy, Choice, Privatisation – only one of the above. 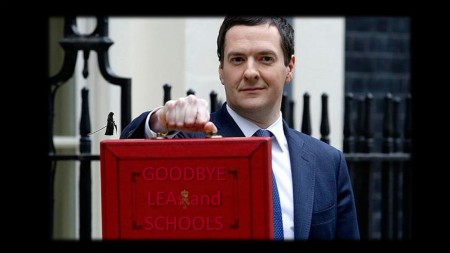 The Tories had a very clear agenda to reduce the size of the state sector and its various infrastructures throughout their time in coalition, and now as a government in their own right – under the banners of “autonomy”, “choice”, “democracy” and “localisation”.

There’s no autonomy or choice when it comes to overruling the wishes of parents, staff and pupils and forcing schools to become academies.

There is no choice when the Regional School Commissioners contact schools within hours of a “notice to improve” with a list of potential “buyers”, sorry, “sponsors” for their schools.

There’s no democracy in implementing a policy that wasn’t even in their election manifesto.

There’s no localisation when the overall control of education is firmly held in Westminster and outsourced for implementation to regional and national academy chains. 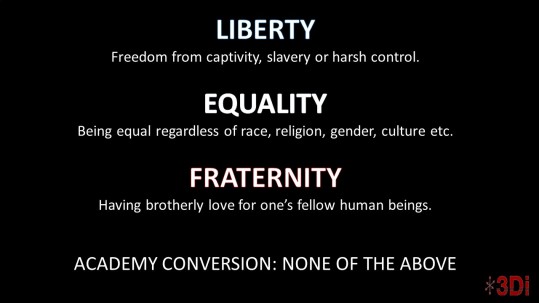 Let’s also be clear, there has been a degree of incompetence and disorganisation in some local education authorities and children’s services – but not all. Some offered services that were welcomed and valued in schools throughout the country.

An Ofsted inspector goes into a school – a school judged as good, therefore no call for academy conversion (incidentally, “academisation” is not a real word). The head teacher of the school is pleased with the outcomes but is concerned about learning in one subject area – let’s say art or music or PSHE – and would like some additional CPD for that subject. She asks the inspector where she might access support for this subject. The inspector isn’t allowed to recommend a specific provider or adviser so can’t help her. Due to cuts, the local authority has no adviser any more for the subject. So where does the head teacher go from there?

A parent is concerned about the fact that her child is being bullied. Despite the school’s clear policy and processes, the child still feels threatened and intimidated. The local education authority has been stripped of all advisers – other than one secondary adviser and one primary adviser. They are wholly focused on attainment. Where does the parent go for additional support? The only option is to contact Ofsted and trigger a full and costly Section 5 inspection – assuming Ofsted listens to the parent’s concerns.

Public Health specialists have clear data from GPs and A&E referrals that there’s a significant increase in incidents of self-harming for young people aged between 12 and 16. Child and Adolescent Mental Health Services (CAMHS) has no capacity to support these young people. The local authority has no advisers for PSHE, no money for counselling services, no means of linking with head teachers of the schools to collectively (and preventatively) address this issue because they don’t meet as a collective any longer – as they all belong to different academy chains. How is “localisation” and school autonomy helping these young people? 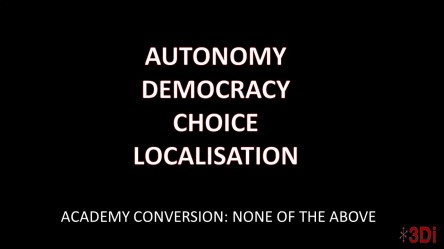 The demise of locally organised services is detrimental to the needs and the all-round achievements of our children and young people. A school, and its pupils – with no access to local support and advice for a given subject – may not be able to move forward. A child who is being bullied has nowhere to go, and must suffer in silence? Coordination and joint planning for preventative and targeted health and wellbeing provision can’t happen without local infrastructures.

The government’s argument for autonomy for schools is valid on one level. The Department of Education suggest that schools should be sharing good practice, and indeed in some cases, this is happening. Clusters of schools are working together, independent of academy chains. But this is left too much to chance. What of the schools that are protective of their “success” and don’t want to share good practice with the neighbouring school judged as inadequate? What about the coordination of subjects deemed less important, where collaboration between schools hasn’t happened or is in its infancy?

Without structures, without foundations, the house falls down. 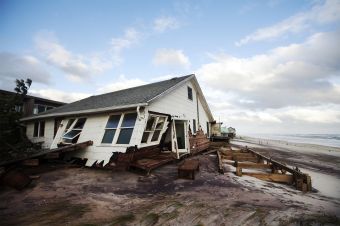 Local education authorities and their advisors may not have been perfect but at least they were grounded in education and the large majority had experience of teaching.

Take a look at the constituent members of the academy chains – barely an education-focused qualification between them. And yes, this does matter.

Here’s a brief overview of one academy chain’s Senior Management Team and Board of Trustees.

And this academy chain is allegedly one of the better ones!

How can this be preferable to an organisation governed and managed by educators? 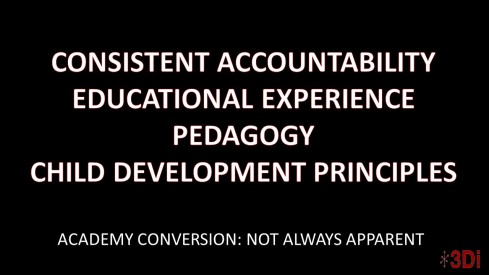 Education should be in the hands of educators, not journalists, not politicians, not hedge funders, not bankers.

It would be so refreshing if the government was honest about their reasons for insisting that all schools become academies because they can’t use the mantra of autonomy when control is firmly in the hands of academy brokers. They can’t talk about localisation when finances and policy diktats are centralised in Westminster. They also need to justify why they spent millions of pounds producing a National Curriculum (which Gove, incidentally said would be the last one – no projected agenda there then) that is effectively pointless if all schools are going to be given the autonomy to ignore it. And whilst they’re at it, they might offer some sort of explanation as to why they’re introducing this academy conversion when there was no mention of it in their election manifesto.

Gary Foskett and Clare Blackhall are educationalists, writers and consultants. We work with schools and other organisations who share our vision of how schools, businesses, etc should work in the 21st Century. We also run courses and contribute to conferences - speaking about our three dimensional model of intelligences and how schools, colleges and universities can develop the full potential of all their staff and students. We also offer consultancy for businesses and public sector organisations to support staff training and organisational change and development. For more detailed information read our blog at https://3diassociates.wordpress.com/ or see our website at www.3diassociates.com.
View all posts by 3D Eye →
This entry was posted in Uncategorized and tagged academisation, academy chains, academy conversion, demise of LAs, George Osborne, local autonomy for schools, Local autonomy for teachers, Ofsted, political interference in education, Regional School Commissioners, road to privatisation, School accountability, The Budget 2016, Tory manifesto 2015, Westminster control on education. Bookmark the permalink.