From time to time the Today programme on Radio 4 broadcasts an item that actually sheds light on an interesting and/or important topic, in which the two speakers who are brought on to debate the topic find they agree with one another. Today was such a day.

08.55
Last week Richard Dawkins argued on Today that humans should apply rational thought when trying to solve the world’s problems and the Archbishop of Canterbury Justin Welby responded on Monday that acting out of love and through emotion is an important part of what makes us humans. Dr Hannah Fry is a mathematician and Elizabeth Oldfield is director of the christian think-tank ‘Theos’.

The crux of the issue is whether logic and reason alone can create a better world, and whether our human feelings and emotions should be set aside when tackling the nation’s or the world’s problems.

The answer, which may be surprising to many, is that none of these human capacities hold the key to making a better world. For example:

So what’s left? What can possibly guide us in our daily lives, our careers and our politics?

One possible answer could be our instincts. After all, the entire animal kingdom relies to a greater or lesser degree on hardwired instincts to find daily sustenance, to breed, to raise offspring and to defeat enemies. Our human brains also have the primitive area called the amygdala which is capable of reacting instantly (and without thought) to critical situations. Fight, flight and freeze are instigated by the amygdala. Destructive emotions may also originate in the amygdala. So not a great idea to let instincts be our primary guides to enlightened action or political decisions.
https://en.wikipedia.org/wiki/Amygdala

So what’s left? What else can enable us to seek truth, manage problems and achieve enlightenment? What else can we use to achieve personal and worldwide peace and tranquility?

What these two speakers agreed on, and what we’ve been writing about on this blog for years, is the crucial importance of intuition. We can’t touch, see, smell or taste intuition, and so it’s part of a metaphysical intelligence. It doesn’t operate through logic or reason, so it’s not part of our intellect. It’s part of what many of us call spiritual intelligence.

Children often have intuition in abundance, and together with instinct it’s what enables them to survive and thrive during the years before they begin to use logic and intellect as powerful tools for growth and prosperity.

We often hear children say, “but that’s not fair”. And they’re often right in saying it. They have an inbuilt sense of values – of what’s right and wrong. They often know intuitively what they should and shouldn’t do in various situations. They understand virtue and lack of virtue through their intuition. They often solve problems without recourse to logic, facts and reason. Often, but not always. Sometimes our feelings win out whilst disguised as intuition, which is dispassionate and unattached but not ‘logical’ in the true sense of the word. What’s supposedly ‘counterintuitive’ is often intuition itself providing us with answers that are contrary to established belief or normal assumptions.

Intuition works best in conditions of relaxed focus or quiet contemplation – what many call creative meditation. It sometimes works when we’re half ‘awake’, when we’re taking a bath or a shower, when we’re taking a walk or having a drinks break. It’s that ‘ah-ha’ moment when solutions to problems come to us when we’re not even thinking about them. And sometimes when we are thinking about them – with solutions coming ‘out of the blue’, not from logic or deduction, just popping into our consciousness from some creative place of knowing or awareness that’s deep inside us.

Intuition and spiritual intelligence also connect us to the sublime and can give rise to an overwhelming sense of wellbeing that we sometimes call awe and wonder. Logic and reason can never take us to this place which transcends simple pleasure and enjoyment, giving us a feeling of tranquility that certain philosophers such as Epicurus thought of as the ultimate state of being – where there is freedom from pain, anxiety and fear of death. It should be clear that ‘spiritual intelligence’ is not the sole province of religions, although some religions such as Zen and Buddhism in general place great emphasis on meditation as a way of getting in touch with our self-awareness and our intuition.

And so, to return to Today’s discussion, it’s vital that we meet with fellow problem-solvers and in the first instance try to get agreement on the values that underpin our actions and decisions – before we proceed to consider the facts, figures and frameworks of logic that will help us towards the end points we hold in common. What’s more, “acting out of love and through emotion” may make us truly “human”, but the use of all of our intelligences all of the time (especially intuition and spiritual intelligence) will make us even more fully human, and lead us eventually to a more harmonious and peaceful planet. 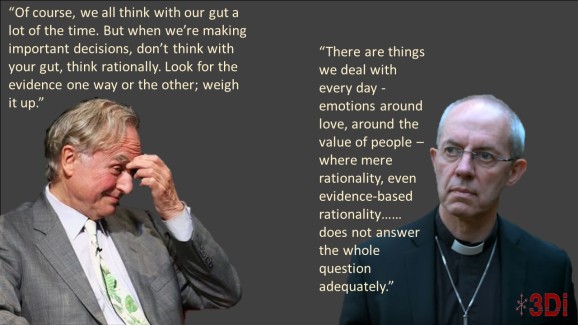 Gary Foskett and Clare Blackhall are educationalists, writers and consultants. We work with schools and other organisations who share our vision of how schools, businesses, etc should work in the 21st Century. We also run courses and contribute to conferences - speaking about our three dimensional model of intelligences and how schools, colleges and universities can develop the full potential of all their staff and students. We also offer consultancy for businesses and public sector organisations to support staff training and organisational change and development. For more detailed information read our blog at https://3diassociates.wordpress.com/ or see our website at www.3diassociates.com.
View all posts by 3D Eye →
Gallery | This entry was posted in Uncategorized and tagged #r4today, 3Di Associates, 3Di Associates and Human Values, 3Di Model of Intelligences, 3Di multiple intelligences, amygdala, Archbishop of Canterbury, Archbishop of Canterbury Justin Welby, BBC Radio 4 Today, difference between instinct and intuition, Dr. Hannah Fry, Elizabeth Oldfield, feelings and emotions, human emotions, Human feelings, instinct, intuition, Justin Welby, multiple intelligences, Richard Dawkins, Theos, values, values and spiritual intelligence. Bookmark the permalink.