Education: Stuck in a Failing Paradigm

“Our education system has mined our minds in the way that we strip-mined the earth, for a particular commodity, and for the future it won’t serve us. We have to rethink the fundamental principles on which we are educating our children.”

Remember that TED talk – from Sir Ken Robinson, who sadly died in this traumatic year of 2020?

“We have to rethink the fundamental principles on which we are educating our children.”

These words were spoken before Gove and Cummings set about ripping the heart and soul out of schooling. They were written before high-stakes exams and league tables contributed to an exponential increase in poor mental health amongst our young people. These words were spoken decades before the current Covid pandemic caused all manner of death, disruption and distress to our global population.

And yet these words are sadly still fresh, still ignored, as over a decade later we are still firmly entrenched in an educational paradigm that wasn’t fit for the 21st Century and certainly isn’t fit for a disease-riven world.

“We’re now running national education systems where mistakes are the worst thing you can make. The result is that we are educating people out of their creative capacities.” 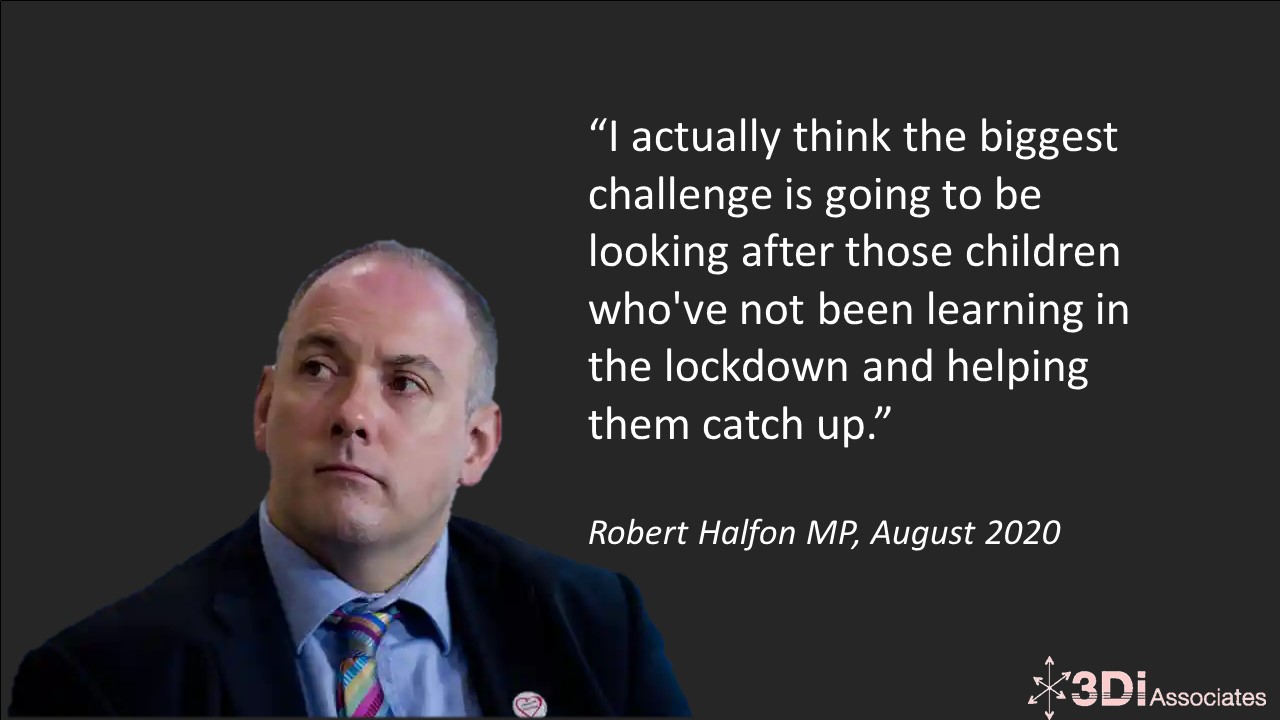 Robert Halfon, Chair of the Education Select Committee, was on BBC Breakfast this morning stating yet again that children and young people must be in schools at all costs. He’s demonstrated throughout the pandemic that he has genuine concerns not only for the education but also for the wellbeing of our school-age children. (He voted against his own government, when it came to Marcus Rashford’s plea for additional spending on food for impoverished youngsters). But he, like so many, is also stuck in a paradigm from which he and they seem unable to escape.

Susannah Reid, the Good Morning Britain presenter, said that she was really concerned about how much “education” her boys had lost during the pandemic and how detrimental it could be to their “life chances”. She too, like so many, is stuck in that paradigm that equates an excellent education to an accumulation of A* grades in GCSEs and A-levels, not an education system that considers drama and dance as vital as maths and physics.

Gavin Williamson has publicly stated that exams WILL NOT be cancelled this year, despite the ridiculously obvious lack of a level playing field – where some youngsters have lost weeks of formal learning compared with others who – with the aid of high quality online learning and access to the internet – have barely lost an hour. They’re all expected to take the same exam, no matter how slimmed down it will be.
(N.B. Scotland and Wales have already made the sensible decision to cancel exams.)

And yet again, it’s the arts and the so-called non-core subjects that have been driven down the pecking order of priorities when it’s precisely these subjects that could and should be used to re-engage those who haven’t had the opportunities at home during the pandemic.

This pandemic is global. Education, in one form or another, is global too.

“Every education system on Earth has the same hierarchy of subjects. Everyone. Doesn’t matter where you go. You think it would be otherwise, but it isn’t. At the top are mathematics and languages, then the humanities, and at the bottom are the arts, everywhere on Earth.”

It’s difficult to talk about opportunities as an outcome of global lockdown, but this was our time folks.

When time is a constraint, as it is in this academic year, what disappears? The ‘creative’ subjects, the engaging, active Socratic learning, the collaborative learning, the innovative thinking because the focus is entirely on an exam, a paradigm and an “education” that is wholly directed towards academic performance based very largely on memorisation and time-limited regurgitation.

We’re not suggesting that children and young people shouldn’t learn maths, English, science and all the other currently valued subjects. Of course they should. But it should be within a revamped curriculum and assessment process that equally values learning in all manner of subjects, giving equal value to learning for heads, hands and hearts.

The sad and painful truth is that we’re not going to see a Ken Robinsonesque change to education in the foreseeable future, but wouldn’t it be great if we could at the very least put a strong and determined pause to the exam factory for the duration of this pandemic  – and a few years after to ensure that those who don’t take formal exams aren’t singled out and penalised in this mad, crazy, exam-loving world in the ensuing years?

We and many other educators implore our government to do the right thing and cancel all exams this year. That is not asking for a cancellation of assessment – which we believe should always have been carried out by the educators who know their children and young people – within a strong and mandatory moderation process.

As indeed it was last year. Everything was clear and straight forward, regarding the Centre Assessed Grades (CAGs), right up to the point when the non-educators put their oar in and messed around with algorithms from which they had to back-track. For the love of all that is good, leave education to educators and stop pretending that we have a level playing field.

The time (and money) saved on exam preparation could be given to exploring all those subjects that have been minimalised or lost during the pandemic. After all, as Ken Robinson said, “Our task is to educate their whole being” and in that, we are failing, badly.

Our gravest concern about children and young people being unable to attend school is far more about their physical, social and emotional than their academic learning. Children and young people are resilient and with the right learning in PSHE, these skills could be enhanced. Why is THIS not a priority? Haven’t these young people been through enough this year without thinking that their only escape from mundanity and isolation is to cram for an exam? It’s unfair and inhumane.

If this government truly valued education, they would have provided the internet and computers to all the young people they said they would. If they valued education, they would enable learning rather than inhibit it. If they understood learning, they’d enable deprived children to come to school when it’s safe to do so and enable teachers to personalise their learning according to need and interest in this year of desperation and destruction.

The reality is that our schools are open because the economy apparently needs them to be. No thought has been given to the fear of young people that they might be spreading the virus – which is patently obvious when viewing the September to December figures. The dogmatic and over-riding idea is to get them through tests, in an environment which is evidently not safe.

The Secretary of State and the Department of Education’s announcement about testing – with its unfair and inopportune timing – clearly demonstrates their total lack of knowledge of how schools operate. The government’s insistence on sticking to this education paradigm of exams being the only or the best measure of success and of learning, in this of all years, is frankly preposterous.

We have to put an end to this. We have to reinvent education but for now, we have to do the right thing and close schools when necessary, which means we have to cancel exams whilst we try to release the world from the indoctrinated and embedded view that education is all about passing exams. If you believe education is exams, exams, exams, then no wonder you’re worried about what children and young people are missing this year. If you broaden your horizons, there’s opportunity beckoning. 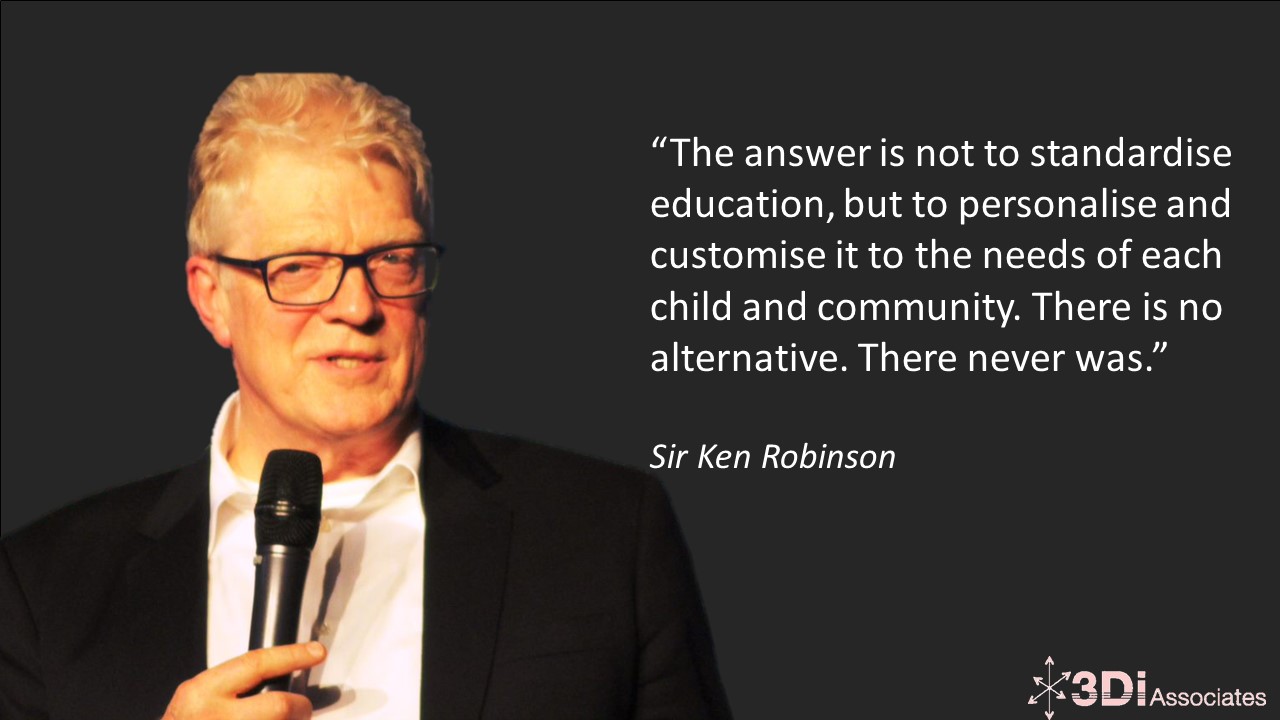 N.B. other links to our posts can be found at the end of these blogposts.

Gary Foskett and Clare Blackhall are educationalists, writers and consultants. We work with schools and other organisations who share our vision of how schools, businesses, etc should work in the 21st Century. We also run courses and contribute to conferences - speaking about our three dimensional model of intelligences and how schools, colleges and universities can develop the full potential of all their staff and students. We also offer consultancy for businesses and public sector organisations to support staff training and organisational change and development. For more detailed information read our blog at https://3diassociates.wordpress.com/ or see our website at www.3diassociates.com.
View all posts by 3D Eye →
This entry was posted in Uncategorized and tagged Assessment in education, CAGs, collaborative learning, Covid, Covid-19, Covid-19 education, creative learning, Engaging children in learning, high stakes exams, high stakes exams and mental health, Post Covid-19 education, PSHE, PSHE and achievement, Robert Halfon, School closures, Sir Ken Robinson. Bookmark the permalink.