Fair play to whoever is producing or editing the BBC’s “Rethink” series on BBC radio, and managed to insert an item on education into the Radio 4 Today programme this week. This is a series that asks what changes we can expect or SHOULD expect as we go through the Covid19 pandemic. Surely things can’t go back to old familiar ways?

The discussion was preceded by a poet, Caleb Femi, reading aloud his thoughts on what needs to change in our system of education. To summarise: 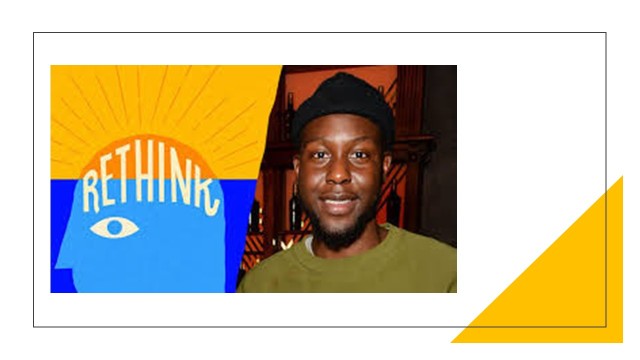 Students were promised that success in tests and examinations is a guarantee of future security and even prosperity. On that promise they have studied hard for the tests. They agreed to “shrink their imaginations and the autonomy of the learning process” for the sake of that security and prosperity. Covid19 has “torn aside the veil” of that promise.

Education ought to be about learning to solve problems, about creativity, innovation, mental dexterity – and the ability to make society a better place and a more equal place for everyone. These are the tools we need to survive in an uncertain landscape. [Life skills are our personal, social and spiritual intelligences combined with the ability to create, imagine, problem solve and innovate.]

We need to learn how to learn independently, how to be creative, how to think autonomously and to think in ways that “put us in the driving seat of our own learning”.

New approaches are needed. Students must be encouraged to think creatively, to exercise their imaginations – to problem-solve in unique, exciting, innovative ways. This is what a post-lockdown relationship within our system of education should look like.

Unsurprisingly perhaps, the makers of this programme invited Daisy Christodoulou, a favourite of Michael Gove and Dominic Cummings,  to refute this point of view and to press the case for the retention of our system of education and its “traditional” methods of teaching.

“Enquiry-based and project-based approaches are not as successful as you might think. Direct instruction and whole-class instruction are more successful. The best way to approach problem-solving skills is through a classroom approach that’s more structured.”

Needless to say, she’s never worked in a primary school, let alone an early years setting. She performed well on University Challenge back in 2006, having acquired a head full of facts that she’s able to recall instantly. 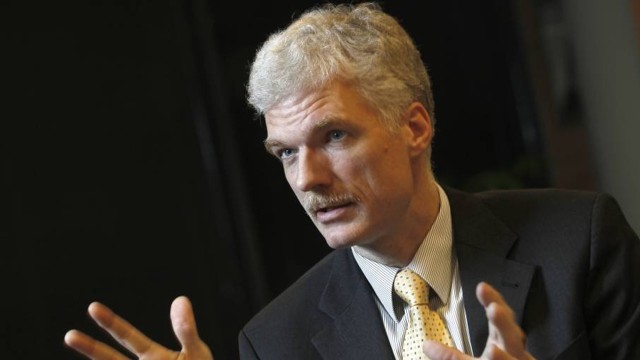 Thankfully Andreas Schleicher, the head of the OECD Programme for International Student Assessment (PISA), a student of physics and mathematics and Honorary Professor in the Faculty of Behavioural and Cultural Studies at the University of Heidelberg, was on hand to deal with these statements.

“PISA tests are not about ‘mastery of content’. We need to reflect not only on the HOW of education but also on the WHY. The Covid crisis has shown us very clearly that education is not a PLACE but an ACTIVITY and young people who have been spoon-fed by their teachers, who have not developed the agency and the strategies to learn on their own, who don’t have the right kind of support systems, have suffered quite badly in this crisis – which has shown that imagination and creativity are part of the resilience of people.”

The BBC, concerned with ‘measurement’ of course, asked how we can measure ‘progressive success’.

“When we measure progress we don’t stop at measuring whether students can reproduce what they have learned. To succeed in PISA tests you must be able to apply your knowledge creatively in novel situations. The situations we give to students are ones they haven’t seen before. Schools teach lots of facts and figures at a very shallow depth. We should teach fewer things at a greater depth and teach conceptual thinking and greater understanding.

This is the essence of success for today and tomorrow. This is not about reducing or cutting ‘subjects’. Trigonometry, for example, is not about being able to think like a mathematician.

Children in Shanghai now develop a really deep understanding of a subject or a concept and thereby are able to use and apply those concepts in many contexts. If you go to a British classroom, on average students will face 17 or 18 rather shallow problems. They are quite good at solving problems on the first layer of PISA tests, but as soon as they get a complex problem they need to be able to think like a mathematician – and they struggle. This suggests to me you need to teach fewer things to greater depth.” 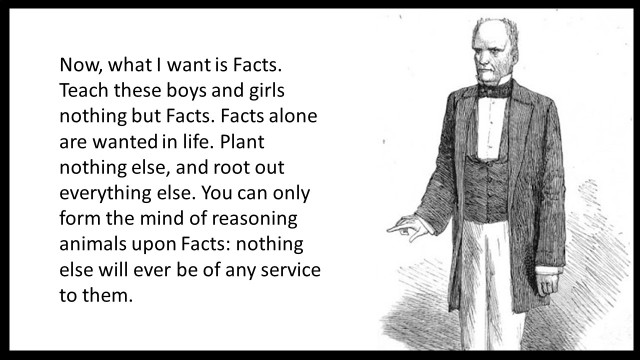 “These are the novel’s opening lines. Spoken by Mr. Gradgrind, they sum up his rationalist philosophy. In claiming that “nothing else will ever be of service” to his pupils, Gradgrind reveals his belief that facts are important because they enable individuals to further their own interests. However, Tom and Louisa’s unhappy childhood soon calls into question their father’s claim that “facts alone are wanted in life.” Ironically, while Gradgrind refers to the pupils in his school as “reasoning animals” and compares their minds to fertile soil in which facts can be sowed, he treats them like machines by depriving them of feeling and fantasy. His jarringly short sentences and monotonous repetition of the word “Fact” illustrate his own mechanical, unemotional character. Finally, it is significant that Gradgrind’s call for facts opens a work of fiction. By drawing attention to the fact that we are reading fiction, Dickens suggests to us that facts alone cannot bring intellectual pleasure.”

And neither does “filling empty vessels with Imperial gallons of facts” produce capable, creative, imaginative thinkers who are also good at self-expression, communication, problem solving, team working and sustained self-motivated lifelong learning. And if you don’t think these things are important take a look at what the Confederation of British Industry and the British Chambers of Commerce have said about the people they need to recruit, and how they want our system of education to change.

Clearly there are many people who have built a career on and make a very good living out of the preservation of a pyramid of academic schooling that tells the vast majority of students that they are also-rans in the great race for ‘A stars’ – the exam grades that will get them into the best schools and the elite universities. Not necessarily good marks in the PISA tests of course (British children have never been in the highest bands) – but good enough for a few to go on to honours degrees and who knows – stardom on University Challenge. 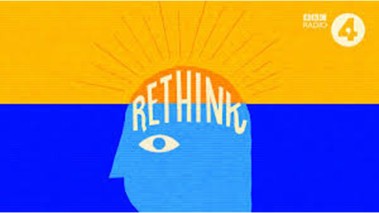 The speaker, and the schoolmaster, and the third grown person present, all backed a little, and swept with their eyes the inclined plane of little vessels then and there arranged in order, ready to have imperial gallons of facts poured into them until they were full to the brim.

THOMAS GRADGRIND, sir. A man of realities. A man of facts and calculations. A man who proceeds upon the principle that two and two are four, and nothing over, and who is not to be talked into allowing for anything over. Thomas Gradgrind, sir—peremptorily Thomas—Thomas Gradgrind. With a rule and a pair of scales, and the multiplication table always in his pocket, sir, ready to weigh and measure any parcel of human nature, and tell you exactly what it comes to. It is a mere question of figures, a case of simple arithmetic.

In such terms Mr. Gradgrind always mentally introduced himself, whether to his private circle of acquaintance, or to the public in general. In such terms, no doubt, substituting the words ‘boys and girls,’ for ‘sir,’ Thomas Gradgrind now presented Thomas Gradgrind to the little pitchers before him, who were to be filled so full of facts.

Indeed, as he eagerly sparkled at them from the cellarage before mentioned, he seemed a kind of cannon loaded to the muzzle with facts, and prepared to blow them clean out of the regions of childhood at one discharge. He seemed a galvanizing apparatus, too, charged with a grim mechanical substitute for the tender young imaginations that were to be stormed away.

That’s enough literature for today. Back to the hard facts tomorrow.

Gary Foskett and Clare Blackhall are educationalists, writers and consultants. We work with schools and other organisations who share our vision of how schools, businesses, etc should work in the 21st Century. We also run courses and contribute to conferences - speaking about our three dimensional model of intelligences and how schools, colleges and universities can develop the full potential of all their staff and students. We also offer consultancy for businesses and public sector organisations to support staff training and organisational change and development. For more detailed information read our blog at https://3diassociates.wordpress.com/ or see our website at www.3diassociates.com.
View all posts by 3D Eye →
This entry was posted in Uncategorized and tagged 3Di Associates model of intelligences, 3Di multiple intelligences, Andreas Schleicher, BBC Rethink, Caleb Femi, CBI and education, CBI First Steps, Daisy Christodoulou, Gradgrind, Gradgrindism, Hard Times, life skills, multiple intelligences in school, OECD PISA, personalised learning, Rethinking Education, University Challenge. Bookmark the permalink.